As the next key milestone for GoPro will be its fourth-quarter earnings call on February 2, Pacific Crest analyst Brad Erickson has taken a slightly more bullish view on the camera maker, increasing his Q4 unit estimates from 1.9 million to 2.1 million and recalculates slightly higher for ASP expectations. Erickson rates GPRO a Sector Weight with a fair value between $9 and $10 per share.

Erickson wrote, “In light of better-than-feared sell-through, we are raising our unit estimates by a bit more than 10% to 2.1 million units in Q4 from 1.9 million and are raising our ASP estimate slightly as our store checks showed an impressive ability to pivot point-of-purchase displays to selling the Karma Grip ($300 electronic stabilizer) when it became clear the Karma would not be launched. Further, we are removing Karma from our Q4 estimates and now expect volume shipments to begin in 2Q17. For 2017, we expect 150,000 drone shipments to contribute $88 million in revenue.”

“Our checks indicate that GoPro exited the quarter with a healthy 7-8 days of inventory at Best Buy in the United States with sell-through having sustained periods of significant growth through the quarter. One quarter does not make a trend, and regarding the return to growth, we note that GoPro was lapping an abysmal 4Q15 when sell-through was 40%-50% below ship-in. However, for those harboring hopes of a turnaround, it is a start,” the analyst added.

As usual, we recommend taking analyst notes with a grain of salt. According to TipRanks, which measures analysts’ and bloggers’ success rate based on how their calls perform, analyst Brad Erickson has a yearly average return of -8.1% and a 47% success rate. Erickson is ranked #4016 out of 4359 analysts. 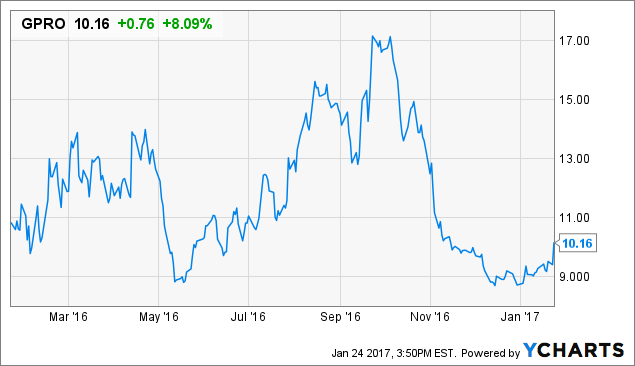 As Apple slated to step into the earnings limelight on Tuesday, January 31, Baird analyst William Power reiterates an Outperform rating on the stock, with a price target of $133, which implies an upside of 11% from current levels.

Power noted, “We expect solid FQ1 results, and while we acknowledge moderate risk to the March and June quarters, we view shares as attractive in advance of the iPhone 8 cycle. In addition to the improved growth profile, Apple should be a prime beneficiary of a potential tax repatriation holiday and lower tax rates. Coupled with continued strong services growth, we remain positive on the company’s overall positioning and opportunity.”

Out of the 32 analysts polled in the past 3 months, 26 rate Apple stock a Buy, while 6 rate the stock a Hold. With a return potential of nearly 13%, the stock’s consensus target price stands at $136.05.