As earnings season continues to keep unfolding, tech players xG Technology Inc (NASDAQ:XGTI) and Cisco Systems, Inc. (NASDAQ:CSCO) rolled some opposite dice, with XGTI’s Vislink transaction underway this quarter and a substantial earnings beat versus CSCO’s revenue outlook conversely shortchanging expectations to the tune of over $500 million at the midpoint of the range. Whereas Roth Capital continues to back XGTI, BMO remains sidelined on Cisco, awaiting for a catalyst to drive shares back up. Let’s dive in:

This past Monday, xG Technology posted first quarter earnings for the year that jazzed investors with shares skyrocketing 39%. Roth Capital analyst William Gibson believes that while “no good comps” exist for the tech firm and competition is fierce, he remains staunchly bullish on the stock. Moreover, the analyst’s optimism hinges on the belief that the success could be several times over should XGTI know how to efficiently bring its prospects to fruition.

Therefore, the analyst reiterates a Buy rating on shares of XGTI with a price target of $3.50, marking a 92% increase from current levels.

For the first quarter of 2017, the analyst posted $8.3 million in profit, or $0.84 in EPS on back of $9.3 million in revenue. The analyst had projected a $4.8 million loss, or ($0.51) per share on $9.6 million in revenue. The tech firm closed the quarter with $4.7 million in cash, along with completing a Vislink transaction for $8.5 million in cash and only a $2 million 9% note due October of next year. Because the Vislink transaction faced a five-week stall in closing, the firm has pulled back on its revenue outlook for the year from $60 million to $55 to $56 million.

In reaction, the analyst has adjusted some estimates, noting, “We followed guidance, lowering our revenue estimate to $55.1 million from $60 million previously. Including the preliminary bargain purchase price adjustment, we estimate the company earns $9.9 million or $0.85 per share versus a $5.1 million loss or ($0.45) per share previously, which didn’t include the adjustment. We estimate GAAP profitability in the second half under both models.”

“We expect the gpm to range between 52.2% and 53.7% the rest of the year. xG is considering incorporating banded cellular sales which would lower margins but increase revenue and gross margin dollars. No decision has been made in that regard and it is not in the guidance or our model,” concludes Gibson.

According to TipRanks, which measures analysts’ and bloggers’ success rate based on how their calls perform, William Gibson is ranked #4,255 out of 4,561 analysts. Gibson has a 46% success rate and faces a loss of 8.0% in his yearly returns. When recommending XGTI, Gibson earns 28.2% in average profits on the stock. 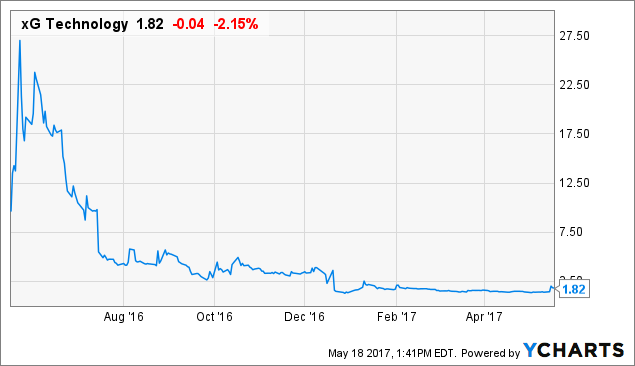 Cisco shares are falling 8% today following revenue guidance BMO analyst Tim Long dismisses as “disappointing,” leaving him cautious as ever on the networking equipment maker’s opportunity to rebound. As such, the analyst reiterates a Market Perform rating on CSCO while reducing the price target from $35 to $32, which represents a close to 3% downside from where the stock is currently trading.

For the first quarter of 2017, Cisco posted $11.94 billion in revenue, aligning with consensus, as well as an EPS beat of $0.60 compared to consensus and the analyst’s expectations of $0.58, thanks to a stronger margin. Moreover, the company brought in 64.4% of gross margins, outperforming the analyst’s forecast of 63.8% as well as operating margins of 32.3% that “handily beat” the analyst’s projection of 30.0%. On the heels of the print, the analyst lifts his pro forma EPS from $2.37 to $2.38 while pulling fiscal 2018 EPS expectations back from $2.50 to $2.45. However, Long notes, “While the revenue performance was okay, orders painted a different picture and management is assuming the weaker trends continue in Q4.” The real sharp pangs of dissatisfaction lie in revenue outlook, which the Cisco team believes stems from several pieces of the puzzle that did not quite line up: weaker U.S. federal dollars from a vague budget that was responsible for 25% of the over $500 million shortfall, less service provider spending, issues that arose particularly in Mexico’s market, as well as “geopolitical dynamics.”

While “Recurring revenues ramping,” they’re simply “not fast enough,” explains the analyst, adding, “Cisco’s push to drive more recurring revenues is going as planned with strong growth metrics across the board, but the positives are being offset by challenges in other parts of the business.”

Long surmises, “Cisco’s transformation to a recurring revenue model is progressing as planned, but as we outlined in our recent downgrade, the benefits of transformation will take time to play out. In the meantime, Cisco is facing challenges in other parts of the business and the move to recurring revenues is a near-term headwind to growth. The weaker outlook seems more macro driven than share-loss related, but other than the upcoming analyst day, there does not seem to be a near-term catalyst that will move the shares higher from current levels.”

As usual, we like to include the analyst’s track record when reporting on new analyst notes to give a perspective on the effect it has on stock performance. According to TipRanks, five-star analyst Tim Long is ranked #200 out of 4,561 analysts. Long has a 66% success rate and realizes 14.2% in his annual returns. When recommending CSCO, Long yields 17.8% in average profits on the stock.

TipRanks analytics show CSCO as a Buy. Out of 14 analysts polled by TipRanks in the last 3 months, 11 are bullish on Cisco stock while 3 remain sidelined. With a return potential of nearly 12%, the stock’s consensus target price stands at $37.73.