Roth Capital analyst William Gibson provides insight on xG Technology Inc (NASDAQ:XGTI) following the company’s recent third-quarter print and amid a forthcoming acquisition of Visilink, anticipated to close by the middle of December. In light of the recent earnings release and the acquisition update, the analyst reiterates a Neutral on shares of XGTI with a $0.50 price target, which represents a 62% increase from current levels.

For the quarter, XGTI lost $3.1 million, or ($0.20) per share on revenue of $1.9 million, compared to the analyst’s projection for a $4.5 million loss or ($0.48) per share on revenue of $1.7 million. Operations spent $1.9 million of cash, leaving XGTI to close the quarter with $1.8 million in cash. Moving forward, the company is “on track” to garner above $2 million of cost savings thanks to its acquisition of Integrated Microwave Technologies (IMT).

Meanwhile, the share count for the quarter reached 15.7 million shares, coming in ahead of the analyst’s estimate for 9.4 million shares. At the close of January, XGTI acquired IMT in a deal for $3 million and paid $500,00 on April 15, still obligated to pay an additional $2.5 million in Series D convertible “immediately” preferred shares in $250,000 tranches by the end of the year, leaving a remaining $1.3 million. For this reason, the analyst raised his share count forecast for fourth-quarter.

If the Visilink acquisition goes through as Gibson expects by the middle of December, XGTI guides fourth-quarter revenue to hit $4 million with 2017 revenue reaching to $75 million and operations bringing $5 to $10 million of cash and positive EBITDA of $10 to $15 million. Gibson adds, “Next year’s guidance implies significant new business wins by IMT and xG as well.”

“We recognize our price target is outside the normal range for a Neutral rating according to ROTH’s stated rating system. However, this company has never been profitable and has accumulated losses through 3Q16 totaling $200 million. Marcum LP, its auditors, question the company’s ability to continue operating as going concern. We believe it is best to wait until the company closes the Visilink acquisition and secures new contracts to demonstrate it can operate profitably before an upgrade,” Gibson concludes.

As usual, we recommend taking analyst notes with a grain of salt. According to TipRanks, William Gibson is ranked #3,891 out of 4,227 analysts. Gibson has a 38% success rate and faces a loss of 9.2% in his annual returns. When recommending XGTI, Gibson earns 0.0%. 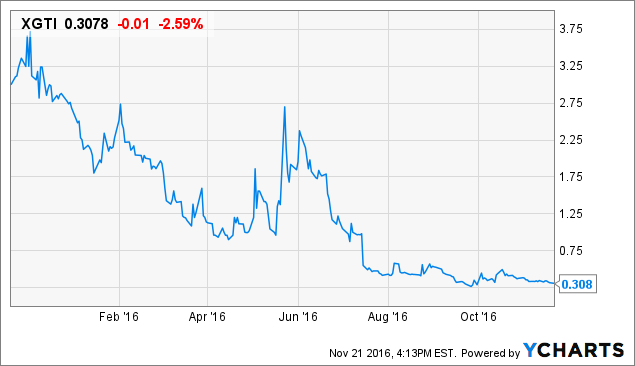