RBC Chimes In on Etsy Inc (ETSY) Amid 2Q Beat

RBC analyst Andrew Bruckner weighs in on shares of e-commerce giant Etsy Inc (NASDAQ:ETSY) following its second-quarter results. Bruckner takes notice of a strong quarter from both sides of revenue, which came in with $85.3 million, and earnings of $14 million, raising his price target from $11 to $13 accordingly. However, even in light of results that boast a 39% year-over-year growth and outclassed both the Street’s expectations as well as Bruckner’s own estimates, he remains neutral.

Etsy’s stellar performance includes attributions to strong GMS and take rates, robust revenue growth that benefits from last November’s PayPal integration, strong EBITDA margins that beat consensus by 7%, and raised guidance. GMS posted 23% year-over-year growth coming in at $670 million and take-rates of 12.7% were up 151 bps year-over-year. Seller services grew 58% year-over-year, and EBITDA margins of 16% were well ahead of the Street’s expectations.

Bruckner recognizes all these positive factors and as such, adjusted his estimates as a reflection of Etsy’s growth. For 2016, Buckner raised his projection to $350 million and increased his earnings estimates up to $47 million. The analyst points to hesitation that highlights unknown risk, explaining, “Etsy is well-positioned to drive superior L-T earnings growth. The company faces a large TAM ($70B+), has secular tailwinds, and has a high proportion of organic traffic. Further, its Seller Services appear to be gaining traction among Active Sellers. However, uncertain impact from marketing spend outlook, ongoing impact on core metrics from Int’l cross-border headwinds, and potential competition from well capitalized competitors remain risks.” With optimistic caution, Bruckner waits to see how Etsy following this quarter’s momentum can face the rising challenges ahead.

According to TipRanks, which measures analysts’ and bloggers’ success rates based on how their calls perform, Andrew Bruckner is ranked #1,945 of 4,085 analysts on TipRanks. He maintains a success rate of 67% and realizes an average return of 2.6%.

TipRanks analytics show ETSY is a Hold, with 100% of analysts issuing a Hold on shares. The consensus target price for the stock is $13.06, marking a nearly 6% downside from current levels. 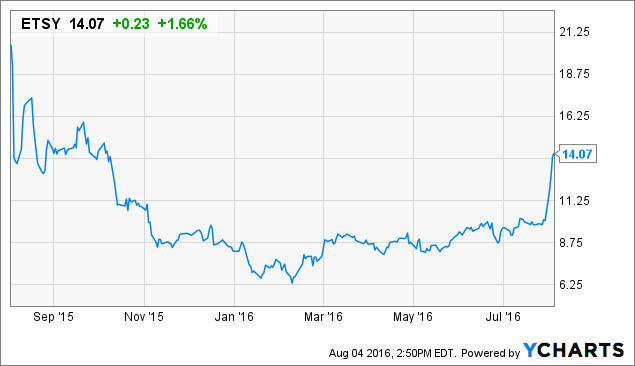 RBC Sees ‘Pockets of Opportunity’ in These 3 Internet Stocks

2 Hot E-commerce Stocks to Put in Your Shopping Cart