Pivotal analyst Brian Wieser explores the prospects of four kings of the internet court ahead of second quarter earnings for the year: Facebook Inc (NASDAQ:FB), Snap Inc (NYSE:SNAP), Alphabet Inc (NASDAQ:GOOGL), and Twitter Inc (NYSE:TWTR). Specifically, the analyst spots “heightened downside risks” for Alphabet and Facebook in anticipation of the print while continuing to be bearish on Snap. However, of these crucial stock players, Twitter is the sole company to earn an added dose of confidence from Wieser’s stance. (To watch Wieser’s track record click here.)

When sizing up Facebook, Wieser believes the social media titan’s crucial issues boil down to digital media owner challenges with third party measurement tools as well as visibility, believing that these have impacted particularly CEO Mark Zuckberg’s brainchild over the course of these 12 months. “Although Facebook is making progress in providing better access to third parties to provide independent measurement, viewability problems won’t go away, especially as advertisers raise standards on this metric,” explains Wieser.

Of course, the analyst acknowledges Facebook nonetheless still has plenty of upside irons in the fire, between Instagram, Messenger, and WhatsApp for growth channels down the line. For now, with the company set to deliver earnings on July 26th after the close, the analyst reiterates a Hold rating on shares of FB with a $140 price target, which represents a 10% downside from where the stock is currently trading.

Meanwhile, Snap shares were falling almost 9% yesterday, and the analyst’s sentiment on the popular Snapchat app parent company does not seem to fare any differently than investors. However, though the analyst admits “we’re still negative” on Snap when appraising valuation, he notes that when breaking down Nielsen’s DCR data, the analysis is rather favorable, with the company faring “reasonably well in terms of usage” along with “many devoted advertisers who will support its growth, especially the film studios.”

The bigger picture remains predominantly bearish to Wieser, who ahead of the company’s second financial quarter results anticipated at the beginning of next month, the analyst reiterates a Sell rating on SNAP with a price target of $9, which represents a just under 42% downside from where the shares last closed.

What of Alphabet’s brand safety bad rep plaguing the Google-parent company, with management left to grapple with its global issue through tools to tackle controversial advertising content? “It’s seems clear that Google has not fully recovered from the brand safety episode which started earlier this year,” Wieser asserts.

Believing that while it may be close to impossible for shareholders to break down the short-term shortfall amid a low-profile mentality the Alphabet team assumed on the matter, the more pressing contention is the investment of time from the exec department. Now, instead of “upselling on using Google ad products more strategically,” the Alphabet team has been left to wrangle marketers and brand safety publicity concerns.

Meanwhile, this is a problem Wieser contends will not be leaving Alphabet’s premises “any time soon,” as unlike the usually preferable machine-solving tactics the team likes, “it appears to us that solutions will require more humans.” With Alphabet set to deliver is second-quarter earnings July 24th after the bell, the analyst surveys from the sidelines, reiterating a Hold rating on GOOGL while cutting the price target from $990 to $980, which represents a close to 3% increase from current levels.

The one tech titan that received a nice boost in positive sentiment is Twitter, as even though Wieser certainly has his reasons to highlight caution, industry feedback is coming back in support of the company, and even shares were on a 3% rise yesterday. Wieser surmises, “The company will probably struggle to grow during 2017, but we think it has mostly cycled through the spending they generated from advertisers who bought Twitter inventory as a ‘bright, shiny, object’ rather than spending to meet specific advertiser needs which Twitter can uniquely satisfy.”

Before market open on July 27th, Twitter is gearing up to serve its second quarter print, and in reaction to “improved” industry discussions, the analyst reiterates a Hold rating on shares of TWTR while boosting the price target from $15 to $17, which represents an approximately 9% decrease from where the shares last closed. 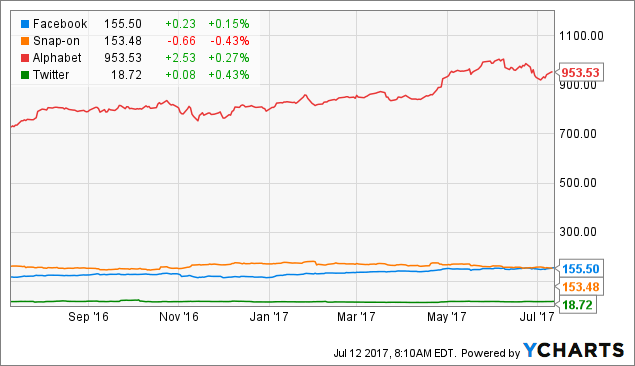