However, with the stock trading around $115 on Friday, Roth Capital analyst Brian Alger believes that upside is clearly limited. As such, the analyst reiterates a Neutral rating on NVDA, with a price target of $120.

Alger wrote, “We remain bullish on the growth prospects for Nvidia and we are impressed at the transformational breakthroughs its technology is enabling in virtually every industrial field. However, as we previewed earlier this week, we believe investors enthusiasm may be ahead of the fundamental growth. Based on the guidance and commentary during the call, we expect most models to stay around $8 Billion in Sales for FY:18 with consensus EPS coming in somewhere near $3.25. We are modeling slightly higher on both metrics, but are challenged by the implied valuation.”

Out of the 29 analysts polled in the past 3 months, 16 are bullish on Nvidia stock, 11 remain sidelined, while only 2 are bearish. With a downside potential of 7%, the stock’s consensus target price stands at $107.92.

Roth Capital analyst Darren Aftahi reiterates a Sell rating on shares of Yelp with a price target of $30, after the company reported in-line fourth-quarter results, but lower than expected guidance for 1Q17 and 2017. Overall, Yelp shares are currently trading at $36.07, down $5.43 or 13%.

Aftahi commented, “YELP guided its 1Q17 range for sales/EBITDA to $195-199M/$25-28M, which came in below our prior estimates of $203.3M/$29.9M respectively. For FY17 YELP said it would invest more heavily in product development and performance marketing with S&M expected to grow faster than the midpoint of sales growth of ~25%. It put initial FY17 sales/ EBITDA guidance at $880-$900M/$150-$165M, which was roughly in-line with our estimate and consensus, although consensus EBITDA stood near the high end of the guide at $164M. We have increased costs modestly and revenue as well, but overall our model is little unchanged other than GAAP EPS, which is reduced on higher costs in FY17. Our general long-term thesis has always been that YELP would eventually have to spend more money on marketing as mobile consumers started to plateau.” 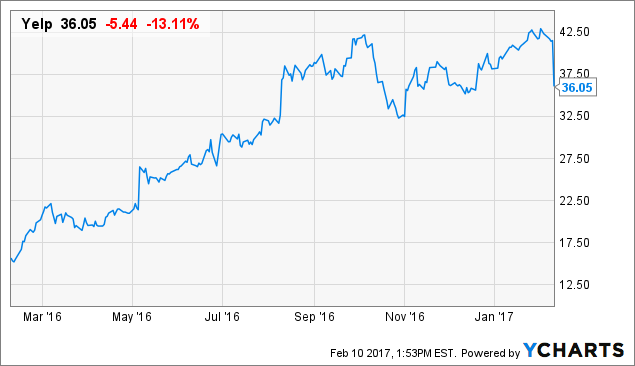