Merrill Lynch analyst Bradley Sills remains bullish on shares of Tableau Software Inc (NYSE:DATA), on the heels of the company’s “healthy” license sales and outlook that were unexpectedly strong in its second-quarter. The analyst reiterates a Buy rating, while suggesting a price target of $75.00, marking a 42% increase from where the shares last closed.

Tableau reported licensing revenue of $116.4 million, indicating a year-over-year growth of 20% and outperforming Sills’ projection by 17%. Meanwhile, Tableau experienced a nice acceleration in license bookings growth of 28% in light of adjustments made for continued mix shift to ratable subscription deals. In just this past quarter, the company closed $100,000 in deals, a significant 42% upsurge in year-over-year. However, earnings per share (EPS) hit just under Sills’ forecast of $0.05 in the aftermath of a ratable mix shift in conjunction with increased sales and marketing spend.

Even in light of Tableau missing the mark in EPS, Sills affirms that the company’s substantial license equivalent growth of 25% to 30% is sustainable. As Sills weighs DATA’s hefty license upside in the ballpark of $3 million, bookings acceleration of approximately 28%, and enterprise deal growth of 42%, the analyst sees a company whose efforts to boost sales and close sizable deals are finally coming to fruition.

Sills advises, “We encourage investors to focus on the license bookings and license equivalent growth rate (28% in Q2) as the true growth rate during this transition. We calculate this to be roughly 25% in FY16 and likely to be sustainable given solid competitive advantages amongst power users of self-service analytics, a category that Tableau has pioneered.”

According to TipRanks, Brad Sills is a four-star analyst, ranked #500 of 4,085 analysts on TipRanks. He maintains a 68% success rate, realizing an average return of 18.2%. However, when rating DATA, the analyst maintains a 33% success rate and an average loss of 14.5%.

TipRanks analytics exhibit DATA as a Buy. Of the 23 analysts polled in the last 3 months, 56% of analysts issue a Buy rating for DATA, while 39% maintain a Hold rating, and 5% uphold a Sell rating for the stock. The consensus target price for shares of DATA is $63.10, marking an 18.61% upside from current levels. 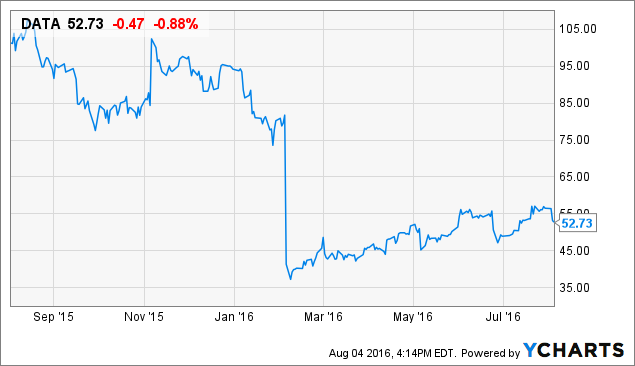 Analyst Focuses On Tableua Software Inc (DATA) Ahead Of Earnings