Bernstein's Stacy Rasgon and Rosenblatt's Hans Mosesmann size up a liability that could be a nightmare for Intel; but INTC's hardware security bug could translate as a dream for AMD's CPU opportunity.

Intel Corporation (NASDAQ:INTC) shares are dipping nearly 6% after tech investors caught word of a glitch in the chip maker’s processors, the liability of which could cost Intel big time. A bear wagers no matter what new PCs are sold to customers to which server computers use Intel chips, the risk here gravely negates the reward. In reaction, Advanced Micro Devices, Inc. (NASDAQ:AMD) investors are seizing on today’s crack in the rival’s sentiment, sending surging 9%.

Bernstein analyst Stacy Rasgon believes the liability could be as rough as the Pentium FDIV bug from the early ’90s and calls this prospective liability “the biggest open-ended question we have at the moment.”

Therefore, the analyst reiterates an Underperform rating on INTC stock with a $34 price target, which implies a nearly 23% downside from current levels. (To watch Rasgon’s track record, click here)

“For Intel, we believe the negative (charges, potential ongoing liability, possible share loss etc) outweighs the potentially positive (if you want to call it that) of a possible accelerated replacement cycle,” explains Rasgon.

In fact, the analyst adds, “Even if new processors are desired, we struggle to believe that Intel won’t face some sort of financial liability. We note for example the Pentium FDIV bug back in 1994, where the company faced problems with the floating-point unit on some versions of their early Pentium chips; the company took a $475M charge (equivalent to the replacement cost of the flawed processors) and offered replacements as desired. We also recall the Cougar Point chipset issue in 2011 (with a ~$700M charge taken). The current problem feels much bigger ($475M would have replaced perhaps 5-10M processors back in 1994, and the Cougar Point issue affected ~8M units, while the affected PC installed base today is in the hundreds of millions of units).”

How can AMD stand to benefit from Intel’s stumble? Consider that “the flaw may increase the desire of the ecosystem to explore alternatives,” writes Rasgon, who likewise notes that this then provides “them a further opening as they launch new products that are not affected by the bug.”

For now, even as the analyst sees INTC’s loss as AMD’s gain, he remains sidelined on today’s chip maker winner, reiterating a Market Perform rating on AMD stock with an $8 price target, which implies a 33% downside from current levels.

Will performance impact Intel’s product line as a chain reaction to the glitch’s resolution and will this allow AMD to “further close the gap” in the server arena? Rasgon is keeping his eyes peeled.

Additionally, “ARM-based CPUs may have a similar bug while AMD […] Zen-based CPUs do not,” the analyst highlights, which is a clear advantage for AMD here.

On back of the Intel CPU bug disaster, the analyst reiterates a Sell rating on INTC stock without listing a price target and stays the bullish course on its chip competitor, maintaining a Buy rating on AMD stock with a price target of $22, which implies a nearly 84% upside from current levels. (To watch Mosesmann’s track record, click here)

“From what we understand so far, there is no easy software driver patch to the problem and requires an operating system kernel redesign for Linux (appears completed), Windows,” writes Mosesmann, a strike against Intel.

For context, the analyst says to bear in mind the same ’90s bug that Rasgon mentions; a bug that cost Intel almost a whopping $500 million to replace the defective CPUs at the time. “The current Intel problem, if true, would likely not require CPU replacement in our opinion. However the situation is fluid. Regardless, here are the issues Intel may have to contend with all of which are non-trivial.”

The challenges Mosesmann spots ahead boil down to four key issues confronting Intel:

“1. Potential indemnification to harm or costs customers may have incurred.

Time will tell if today’s bug haunts Intel in the same way as the ’90s one that cost hundreds of millions of dollars; but for now, AMD bulls are rejoicing as Intel shareholders are left gritting their teeth with a sharp setback. 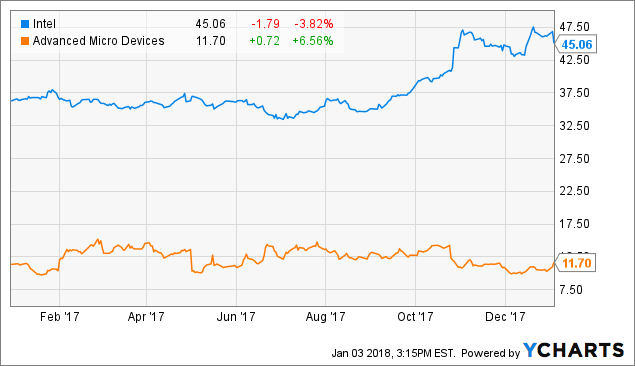