Is Apple Inc. (NASDAQ:AAPL) gearing up to buy Tesla Inc (NASDAQ:TSLA) to forge a new super team of duo tech giants? Rumors are certainly abounding, and the Street continues to weigh in on the good, the bad, and the feasibility factor of it all. As far as Gene Munster- providing fresh perspective from his new research-driven, venture capital firm Loup Ventures- can see down the horizon, these two kings of the tech-verse working together is a “fairy tale”- as in a pipe dream unlikely to come to fruition.

Why not? Perhaps from a consumer standpoint, it is for the best. “Unfortunately, an investment from Apple, nonetheless an acquisition, would be hard to pull off. At the end of the day, that might be better for consumers if not investors,” explains Munster.

However, the analyst acknowledges that the Apple-Tesla whispers sound “so good,” even as he simultaneously dismisses the likelihood that all this hearsay will ever transition beyond the buzzing rumor mill. In fact, Munster sees clear-cut advantages for both giants.

First, the analyst points to Tesla, noting that for the electric car giant, “A $10 billion cash infusion would all but eliminate any current or future cash problems for the company.” Even with the initial dilution, which Munster calculates at 20% presently, long-term, he believes TSLA stock would stand to benefit, particularly when cash flow queries would then be eliminated from the equation.

Conversely, the deal would also benefit Apple, when considering, “Apple would be investing in a company that has the potential to be multiple times bigger over the next decade. They would not be spending on the impossible, which would be building its own car to try to catch Tesla, but rather investing in making the leader even better.” Moreover, with shareholders seeing dollars converted to a tangible project, the analyst anticipates this would beneficially impact Apple’s multiple.

Then where does the crack arise that creates a chasm in the fairy tale model? From Munster’s eyes, it is difficult to envision Apple opting into an alliance without a certain amount of leverage or clout just as, “[…] it’s hard to imagine Tesla management welcoming outside influence on their products when they already make the best car in the world.”

Ultimately, “[…] a $10 billion investment could make some sense, but the deal Tesla would accept, Apple wouldn’t and the deal Apple would accept, Tesla wouldn’t,” Munster concludes, predicting that as Tesla makes strides to solidify its spot as global leading automotive manufacturer, Apple will be left to either seek out a new auto alliance or drop the program endeavor entirely.

TipRanks analytics exhibit AAPL as a Strong Buy. Out of 28 analysts polled by TipRanks in the last 3 months, 28 are bullish on Apple stock and 7 remain sidelined. With a return potential of 4%, the stock’s consensus target price stands at $142.31. In addition, TipRanks demonstrates TSLA as a Hold. Based on 17 analysts polled by in the last 3 months, 6 rate a Buy on Tesla, 6 maintain a Hold, and 5 issue a Sell on the stock. The 12-month average price target stands at $246.93, marking a nearly 4% downside from where the shares last closed. 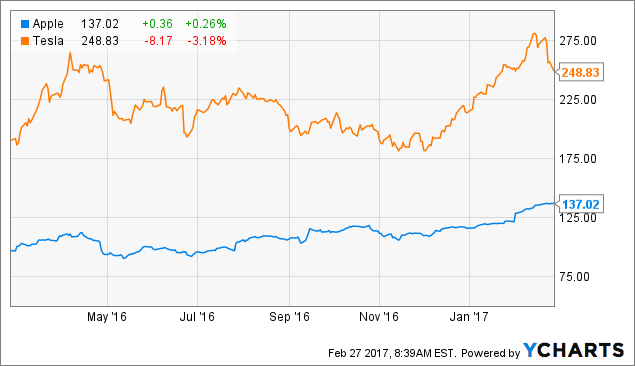