It’s a chip-maker-eat-chip-maker world, and when it comes to the competition, where does Rosenblatt analyst Hans Mosesmann back his chips when evaluating two key industry giants: Advanced Micro Devices, Inc. (NASDAQ:AMD) and Intel Corporation (NASDAQ:INTC)? From where the analyst is standing, though Intel rules in terms of supplier dominance of x86 CPUS “for the foreseeable future,” it is truly AMD’s market world of the servers’ pie- and Intel is just living in it. Particularly not when AMD’s the giant who will “continue to enjoy 99% share in servers.”

Therefore, the analyst rates a Buy on shares of AMD with a $20 price target, which represents a 46% increase from current levels. However, Intel does not garner the same vote of favorable advantage, with the analyst rating a Sell on the stock without listing a price target. (To watch Mosesmann’s track record, click here.)

In terms of Intel’s monolithic silicon strategy paired against AMD’s multi-chip module game plan, the analyst offers his two cents as to why AMD is the long-term winner here: “The monolithic silicon approach by Intel has strong performance attributes however relative to AMD’s multi-chip module (smaller die) approach point to meaningful cost advantages the higher you go up the core count range. Intel will continue to be the dominant supplier of x86 CPUs, however our view is that the years of 99% server share are over as we look to 2018 and beyond.”

“On top of this we believe these two products share a gross margin percentage profile that is roughly in the same area code (likely with 9-handles), which is unheard of,” contends Mosesmann, breaking it down as AMD’s race to lose: “AMD’s product is as good at Intel’s best and has a 30%-50% cost advantage. There are many puts and takes as Intel’s process technology is more advanced and in-house, while AMD’s uses a less advanced GlobalFoundries node. But at the end of the day the use of smaller die in a multi-chip module approach (with the Infinity fabric to connect the die) gives AMD another dimension in how to compete with Intel.” 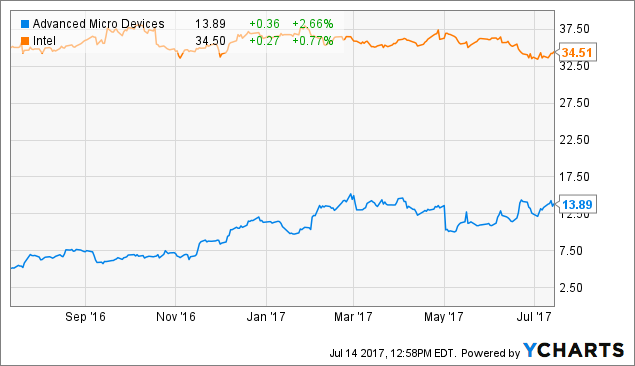