Wells Fargo's David Wong looks at thinning growth in the chip industry, but makes a bullish case for two of the sector's best giants: AMD and INTC.

In a bullish research report on two key chip giants, Wells Fargo analyst David Wong confronts a semiconductor market that may be winding down on gains momentum, but sees reason to confidently bet on Advanced Micro Devices, Inc. (NASDAQ:AMD) and Intel Corporation (NASDAQ:INTC) all the same.

The chip making arena has made a real comeback from the back half of last year that has climbed through 2017, one that Wong anticipates is set for a trajectory in the new year as well. However, even this bull acknowledges a “cautious” stance on the overall industry, with growth primed to decelerate once 2018 hits.

Wong comments, “The chip industry crossed over from year/year declines in the first half of 2016 to year/year growth in the second half.” Yet, with monthly year-over-year growth comps peaking in the middle of this year, the analyst wagers more dipping growth to hit throughout 2018 for semiconductor players, a reaction to “a moderation in memory growth.”

True, last year glowed with gains, but Wong wonders if this could be a result of “pent-up demand,” particularly on the heels of too many years where the chip sector merely experienced “sub-par” growth. This demand then drove “a recovery in semiconductors spanning 2017 and 2018 and possibly extending into 2019,” highlights Wong.

While Wong pinpoints memory chips as one area of promise, he especially likes the autonomous technology opportunity, going as far as to call Intel his “top pick” for next year. Believing Intel is ready to leap to the leaderboard in self-driving cars, the analyst asserts: “Intel’s recent acquisition of Mobileye has, in our view, given Intel a leadership position in chips for autonomous driving applications.”

Server chips could also take center stage next year, with machine learning another glittering prospect for semiconductor players: “We think that the data center is the nexus of a number of important new growth areas of the future, including artificial intelligence, autonomous driving, internet-of-things and 5G communications.”

Keep in mind, AMD shares were already rising almost 7% yesterday after a first sight of the company’s next generation 7nm based graphics architecture codenamed “Navi” in Linux driver code. AMD’s new GPU architecture is poised for a launch likely to be in the back half of 2018.

Even facing pressure from waning growth, Wong is banking on AMD and Intel to succeed in the chip making game for what looks like an enticing 2018. 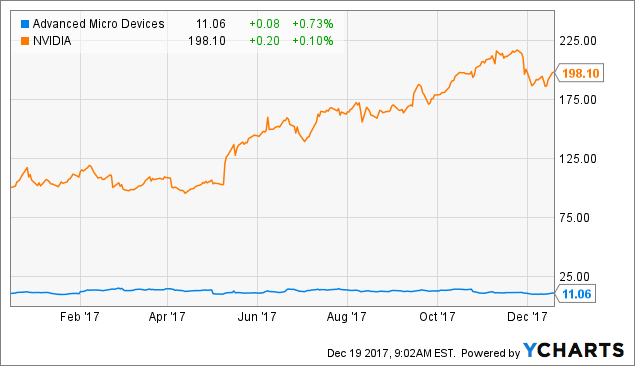