In reaction, FBR analyst Carter Driscoll reiterates an Outperform rating on shares of BLDP with a price target of $3, which implies a 71% upside from where the stock is currently trading.

This joint venture entails the ordering of all long lead time equipment, with expectations for installation sometime in the first half of 2017. Secondly, BLDP notes its facility design is complete with an added positive that “key requirements have advanced,” the analyst commends. With facility construction jump-started and plans for process qualification work to be finalized in the second half of 2017, the analyst remains bullish on BLDP.

Driscoll believes, “This progress points to the JV beginning stack production on time in late 2017, no small feat given this is a greenfield plant and delays are often typical. Ballard continues to forecast approximately $150 million in revenues over the initial five-year term from 2017 through 2021. The stock has traded off recently, we believe, on concerns about the lack of an ITC extension and negative sentiment with the presidential election. However, the revenues from the JV should materially reduce Ballard’s U.S. exposure, and the ITC has limited impact on Ballard’s core business providing heavy-duty motive fuel cell modules,”

As usual, we recommend taking analyst notes with a grain of salt. According to TipRanks, Carter Driscoll is ranked #4,210 out of 4,290 analysts. Driscoll has a 17% success rate and faces a loss of 24.2% in his annual returns. When suggesting BLDP, Driscoll forfeits 23.8% in average profits on the stock.

Additionally, Craig Irwin of Roth Capital rates a Buy on Ballard Power stock with a price target of $3, which aligns with Driscoll’s expectations. 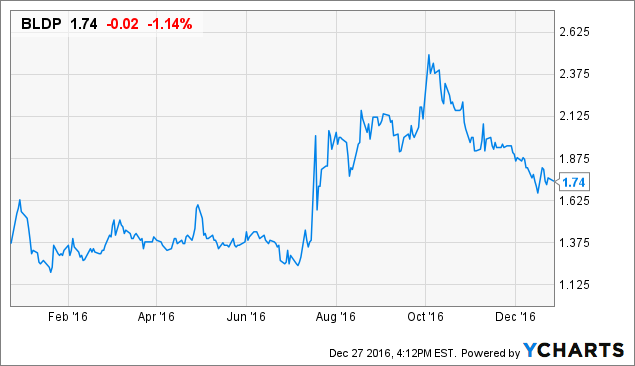