Zoetis: Valuation Is Becoming Stretched Following The Stock’s Gain In The Past 3 Months, Says William Blair

Kreger wrote, “Zoetis announced Wednesday morning that it was granted a conditional license for a vaccine to help prevent porcine epidemic diarrhea virus. Management had signaled on the second-quarter earnings call that this conditional approval was expected, but it is nonetheless an impressive R&D turnaround for a disease that was only diagnosed in the United States in early 2013. We view this product as a fairly modest incremental positive for the model—likely less than a $40 million market opportunity in the United States. But it should also help stabilize sales in Zoetis’s swine business overall (15% of total sales) and reassure investors of the productivity of the company’s R&D team. We are maintaining our EPS estimates of $1.52 in 2014 and $1.66 in 2015. We note the valuation on the name is becoming stretched following the stock’s 14% gain in the past three months.”

According to TipRanks.com, which measures analysts’ and bloggers’ success rate based on how their calls perform, analyst John Kreger has a total average return of 11.5% and a 77.8% success rate. Kreger is ranked #1285 out of 3255 analysts. 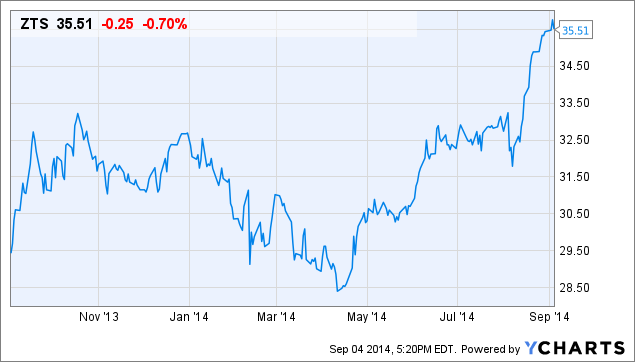