In a research note published today, William Blair analyst Mark Miller reiterated an Outperform rating on Costco (NASDAQ:COST), following Costco’s release of their same-store sales growth in August, the results were much better than expected. No price target was assigned.

Miller wrote, “August comparable-store sales growth of 7% was ahead of the 5% consensus projection. On an underlying basis, excluding slightly negative impacts from higher gasoline prices and the foreign currency translation, the comp increase was 8% in August. The strong comp was mostly driven by a stalwart 4.5% increase in same-store traffic combined with an average ticket increase of 2.0%. The higher ticket, year-to-year, was aided by a low-single-digit increase in inflation within food and sundries, and a midsingle-digit inflation increase in fresh foods categories. Cannibalization was an approximate 50-basis-point detriment to the comp.”

Miller continued, “Impressive midsingle-digit traffic growth remains the primary driver of comps, and the recent increase in food inflation is also positively affecting the average ticket. Over the intermediate term, we believe higher inflation could help Costco leverage fixed and semi-fixed costs. In the short term, this could be a modest negative to earnings as Costco is slower to raise price, and a LIFO accrual is likely, but the recent uptick in inflation is beneficial overall, in our view. We reiterate our Outperform rating and continue to believe Costco is better positioned than large-cap retail peers to achieve steady market share gains, aided by the company’s compelling value proposition and a relatively low e-commerce risk profile.” 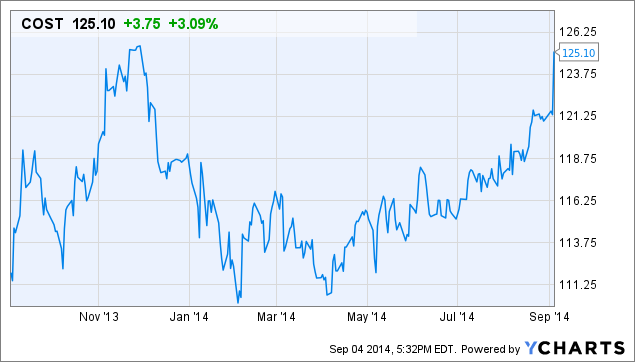