In a research report issued today, William Blair analyst Tim Lugo maintained an Outperform rating on Salix Pharmaceuticals (NASDAQ:SLXP) with a $184 price target, following today’s news that the company has come to a mutual decision to cancel the merger with the Irish assets of Cosmo Pharmaceuticals, Cosmo Technologies.

Lugo wrote, “We are not surprised by this announcement; in our September 23 note on the new Treasury inversion rules, we noted the likelihood that this merger would be canceled. The new rules are likely the first of potentially several changes to the playing field aimed at decreasing the profitability of deals driven by reducing a company’s tax rate by redomiciling the company abroad rather than for strategic purposes.”

The analyst added, “We believe that the cancelation, as well as several recent intellectual property deals, likely sets the stage for a potential merger with another suitor; both Actavis and Allergan have been widely discussed in the press as interested in the company in recent months. While press reports also have noted that Allergan has recently cooled in its discussions with the company, if Allergan were to try to present an Allergan/Salix alternative growth plan at the upcoming December special meeting to thwart Valeant’s hostile takeover attempts, a deal would likely need to be announced in the near term.”

According to TipRanks.com, which measures analysts’ and bloggers’ success rate based on how their calls perform, analyst Tim Lugo has a total average return of -3.9% and a 50.0% success rate. Lugo has a 12.5% average return when recommending SLXP, and is ranked #2783 out of 3315 analysts. 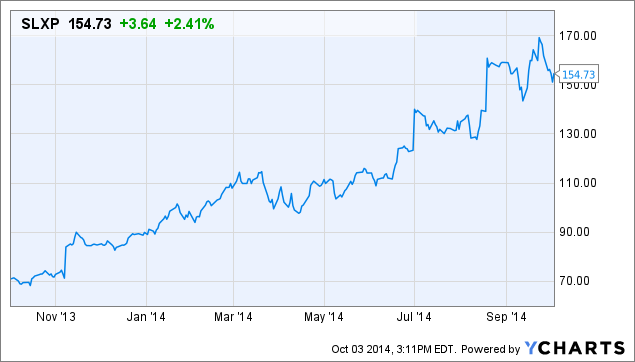