William Blair Maintains Outperform On Calamp On The Heels Of F2Q:15 Earnings

In a research report released to investors today, William Blair analyst Jonathan Ho maintained an Outperform rating on Calamp (NASDAQ:CAMP), following the company’s fiscal second-quarter results that exceeded the analyst and consensus expectations for revenue and EPS. No price target was provided.

Ho said, “We were encouraged by the strong results and commentary for the balance of the year following two quarters of challenging results. We believe investors will be relieved to see that the company’s Caterpillar opportunity is not only on track but poised to be larger than initially anticipated. We believe CalAmp will also benefit from more favorable comparisons starting in the fourth quarter in the MRM business, which should translate into stronger organic growth.”

The analyst added, “In our view, the stock remains underappreciated relative to the long-term opportunity in the M2M market and the company’s exposure to a number of large, underpenetrated verticals. While we believe fiscal 2015 financial results are being overshadowed by the impact of the declines in the company’s legacy satellite business, we are encouraged by the strong EPS growth the company has been able to deliver despite the top-line headwinds. We view fiscal 2015 as largely a transition year, with the company likely to see acceleration in top-line growth as it moves beyond the satellite headwind and it begins to benefit from strong growth in its core MRM businesses and new revenue opportunities in vertical markets such as heavy construction and usage-based insurance.”

According to TipRanks.com, which measures analysts’ and bloggers’ success rate based on how their calls perform, analyst Jonathan Ho has a total average return of -2.0% and a 46.2% success rate. Ho has a 18.6% average return when recommending CAMP, and is ranked #2561 out of 3319 analysts. 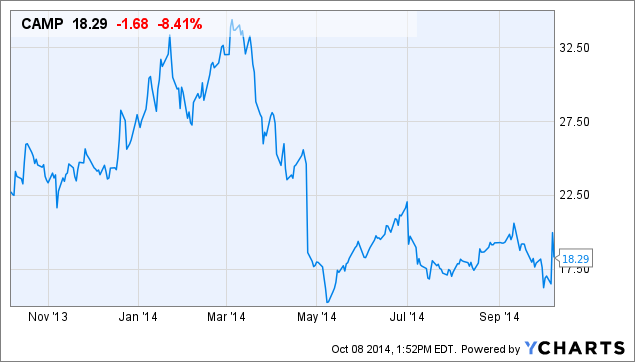