In a research note published today, H.C. Wainwright & Co analyst Andrew Fein reiterated a Buy rating on United Therapeutics Corporation (NASDAQ:UTHR) with a $150 price target, following the judge ruled that UTHR’s Remodulin patent 117 is both valid and enforceable against Sandoz, barring marketing of a generic until the patent’s expiration in October 2017.

Fein notes: “We believe that this ruling deflates the only standing bear thesis on the company, opening the way for new long investors to seek further upside based on any of the following prospects, which we highlighted following the company’s strong 2Q14 performance: (1) we believe there is an ongoing uptick in the average dose of IV Remodulin per patient, which may begin to contribute materially to quarterly sales; (2) UTHR was set to kick off its biggest-yet share buyback program in August, with $500M authorized for the next 12 months; (3) Orenitram sales are likely to surpass consensus based on emerging TID dosing boosting average price per patient (note that Orenitram requires minimal support spending, making any sales accretive to the bottom line); and (4) the case of Orenitram may get an additional boost from the unveiling of underwhelming or outright disappointing full data from competitor Selexipag at an upcoming medical meeting, once believed to be this month’s European Respiratory Society conference, but now not likely until the American Thoracic Society Conference in May. In addition to and compounding all the above, we believe that the IP win may also reopen the way to M&A speculation, including a possible international corporate inversion.”

According to TipRanks.com, which measures analysts’ and bloggers’ success rate based on how their calls perform, analyst Andrew Fein has a total average return of 19.3% and a 76.0% success rate. Fein has a 28.3% average return when recommending UTHR, and is ranked #356 out of 3263 analysts. 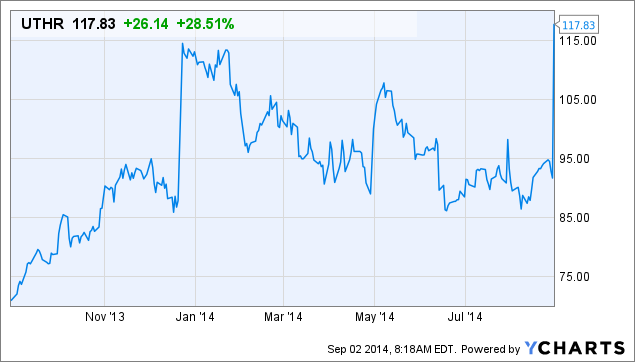