In a research note released today, William Blair analyst Bhavan Suri maintained an Outperform rating on Mitek Systems (NASDAQ:MITK). The report follows recent news that USAA and Mitek have settled their lawsuits against one another, none of the companies will be making payments to the other, and there are no future payments associated with the agreement. No price target was assigned.

Suri wrote, “As a result, Mitek is no longer at risk of losing its patents and might continue using its mobile image capture technology. The two companies had been in litigation since early 2012, during which period Mitek’s stock dropped around 65% in value. Even with the 40%-plus increase in the stock price today, we still view the company’s valuation as attractive given the large market opportunity for mobile image capture technology and Mitek’s favorable market position. At the end of the last quarter, the company had a record 13 mobile deposit reorders, up from 9 in the previous quarter. Further, Mitek has continued to increase the number of signed banks―2,571 at the end of the third quarter, up from 2,222 at the end of the prior quarter―and, more importantly, the number of live customers (2,143 live customers at the end of the quarter, up from the prior quarter’s 1,759) should help drive increased use, furthering reorders and more stable revenue in the next 6-12 months. In addition, we estimate the company has spent roughly 1 million dollars on litigation-related expenses every quarter, so we expect to see an improvement in expenses as a result of the settlement. The discontinuation of the trial and lawyer fees should enable the company to return to profitability.”

According to TipRanks.com, which measures analysts’ and bloggers’ success rate based on how their calls perform, analyst Bhavan Suri has a total average return of 8.9% and a 56.5% success rate. Suri has an -60.8% average return when recommending MITK, and is ranked #983 out of 3270 analysts. 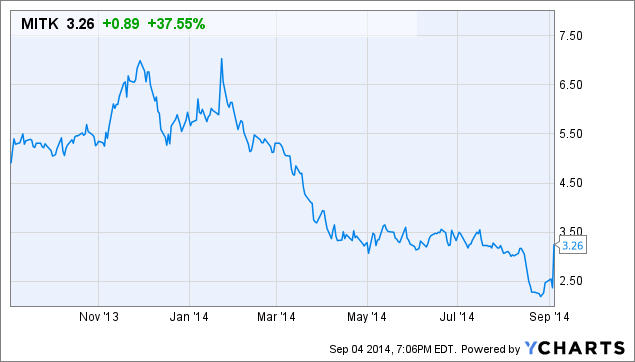