Kolbert noted, “Ferric citrate is now FDA approved, we assume a launch begins by year end . Our revenues forecasts begin in 1Q-2015, with $96 million for the full year. We expect royalties from the company’s Japanese partner to be in the low double-digit range, which we estimate at 12%. We base our US estimates on market of 500,000 end stage renal disease patients in the US, of whom 400,000 (80%) are on renal dialysis. Of these patients, 320,000 (80%) are taking a phosphate binder.”

The analyst added, “We see additional catalysts to drive the stock over the next year, these include: (1) Announcement of Pricing and a new name, (2)data presentation at the American Society for Nephrology meeting in November, with additional data presentations and publications at other upcoming scientific meetings; these presentations should help drive market share and the message; (3) a Phase III trial for Zerenex in predialysis patients (P-CKD) is expected to begin in 4Q14; (4) EMEA approval in Mid-2014; Keryx’s filing for European approval in dialysis and predialysis patients was accepted in April 2014; and (5) an EU launch in individual European “Big Five” countries in 2H2015.” 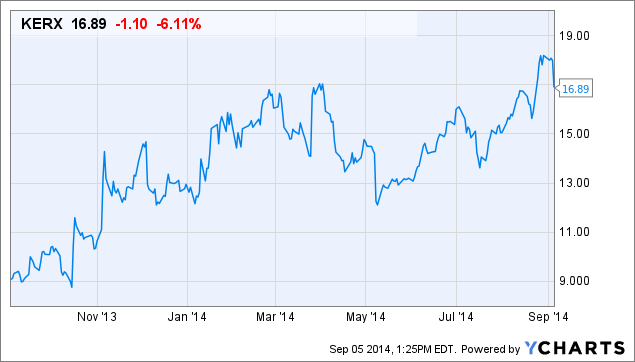