In a research report sent to investors today, Cantor Fitzgerald analyst Irina Rivkind reiterated a Buy rating on Synergy Pharmaceuticals (NASDAQ:SGYP) with a $11 price target, as the company will be presenting additional data from its Phase IIb trial of plecanatide in IBS-C at the American College of Gastroenterology 2014 Annual Scientific Meeting on October 20th.

Rivkind noted, “While top-line Phase IIb data were already released earlier this year, we expect to get more color on the product’s tolerability and dose-response profile at the conference. We continue to believe that plecanatide’s lower diarrhea rate (~20% for Linzess versus 9.3% for plecanatide) may represent a significant commercial advantage for the product. Synergy indicated that the pivotal Phase III trial for IBS-C will start in late 2014. Synergy will also present Phase I data on SP-333, a second GC-C agonist that is currently being developed for opioid-induced constipation (OIC) and ulcerative colitis, with OIC data expected in 4Q:14. We continue to view Synergy as a likely takeout target, and base our valuation on a takeout scenario.”

The analyst added, “The stock has traded off due to investor concerns about imminent financing needs, in spite of competitive plecanatide results, in our view. Synergy recently released an 8-K indicating that it will postpone financing until market conditions improve, though by our estimates the company could run out of cash in early 2015. We therefore expect Synergy to also be exploring creative alternative or non-dilutive financing options— though management will not disclose either way.” 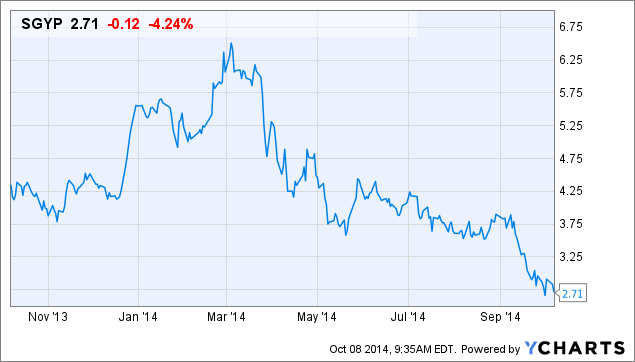