In a research note published today, Roth Capital analyst Joseph Pantginis reiterated a Buy rating on Palatin Technologies (NYSE: PTN) with a $6 price target, following Novartis’s presentation of the full data from the Phase III PARADIGM-HF with LCZ696 in heart failure. Palatin’s PL-3994 represents an important participant in the NPS arena and is expected to enter broader Phase II studies in 2015.

Pantginis wrote, “We believe the Novartis data are important, and supported by an additional editorial in NEJM, by bringing renewed attention to the NPS. Inhibition of neprilysin prevents the breakdown of natriuretic peptides, which have mutli-layers of cardioprotective effects (discussed below). Natrecor previously brought attention to NPS previously, however, we believe the therapeutic approach remains under-addressed and we believe that Palatin’s PL-3994 can be an important player. Palatin’s molecule PL-3994 is potentially differentiated and has completed Phase I and early Phase II studies showing important control of cardiovascular parameters (discussed below). Broader Phase II studies are expected to start in 2015 for this selective NPR-A agonist. We believe that Palatin is at a pivotal time in the company’s history as PL-3994 progresses through development. Regarding the ‘almost’ pivotal BMT program for FSD, we believe we will get visibility shortly regarding the ongoing plans to partner and begin the pivotal Phase III program.”

Pantginis added, “We believe that Palatin represents a significant value proposition based on 1) the promise of BMT in FSD, a large unmet medical need 2) increased partnering potential 3) important validation in hand with a large partnership with AstraZeneca for obesity and 4) strong pipeline growth potential.” 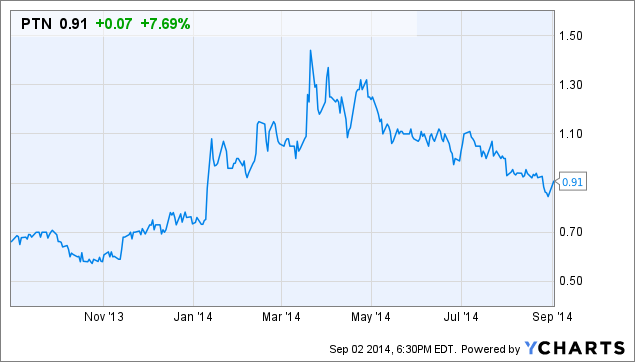