Pantginis noted, “We believe 2014 will continue to be an important year for CANF, as U.S. visibility should increase as the CF101 and ‘102 programs continue to progress. During 2Q14, Can-Fite completed enrollment of the Phase II/III trial of CF101 in psoriasis. Topline results are expected 1Q15. Also during 2Q14, the FDA agreed with the company’s study design for the Phase II trial of CF102 in advanced hepatocellular carcinoma (HCC) with Child-Pugh Class B cirrhosis. The study will include 78 patient in the U.S., Israel, and Europe. Recall that the FDA has previously granted Orphan Designation to CF102 for liver cancer. Can-Fite continues development of a commercial biomarker blood test for the A3AR receptor, which is the target of CF101 and CF102, as well as the company’s CF602 drug. The company is also developing a study protocol for the planned Phase III study of CF101 in RA. Primary focus currently remains on CF101, with previous positive randomized Phase II RA data in hand. We see significant partnering potential for the drug. Recall that CANF is under CDA with ~12 companies for a potential CF101 partnership. We believe the clinical data sets for RA and psoriasis will drive the signing of term sheet(s).” 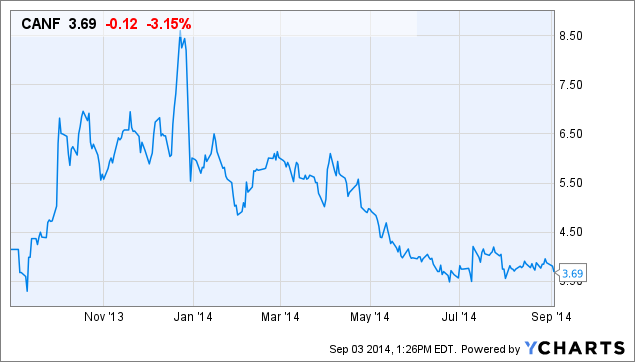