In a research report released today, MLV analyst Carter Driscoll reiterated a Hold rating on Clean Energy Fuels (NASDAQ:CLNE) and reduced his price target to $7 (from $8), which still implies an upside of 39% from current levels.

Driscoll explained, “The decline in crude oil prices and the corresponding decline in on-highway diesel prices have negatively impacted CLNE with the stock down ~50% over the past 3+ months. Given the spread compression we recently discussed CLNE’s strategy and market positioning with management.”

“First, we agree the economic proposition remains valid but investor sentiment has turned bearish. As of yet CLNE has not seen core business impacted by the spread compression from ~$1.50 in the summer to $1.00-$1.10 today. We believe investors are clearly concerned with the rate of adoption of natgas as a vehicle fuel, for heavy-duty trucks in particular, but ~ $1.00 is still a healthy spread. Second, CLNE has $150M bullet payment due in August 2016 and we discussed how the company could start to de-leverage by potentially paying off this principal, which could be a catalyst. Three, we highlight other catalysts such as tax credit reinstatement and natgas adoption by another major trucking company. Finally we modestly lowered our FY15E/FY16E EPS and terminal growth rate for our DCF, resulting in a PT cut to $7 from $8.” 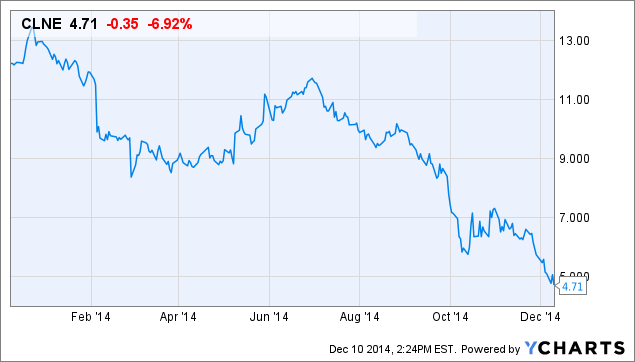