In a research note released today, Maxim Group analyst Jason Kolbert maintained a Buy rating on Momenta Pharmaceuticals (NASDAQ:MNTA) with a $17 price target, following the news that MNTA and Mylan (NASDAQ:MYL) have both filed complete ANDAs for 40mg/mL generic 3x weekly copaxone. Both companies have claimed first-filer status but it is not yet known who has first-filer status.

Kolbert wrote, “We are a bit surprised at the quick challenge to 3x weekly, which has been an amazingly successful switch strategy managed by Teva. We view Sandoz and Momenta (partners) as smart, understanding the value of a generic 3x weekly to effectively compete. We are hopeful to see generic Copaxone (daily) approved in late 2014/early 2015, but we have no particular clarity on timing. We do see Teva as benefiting to the high EPS scenario offered by guidance as a result of delays in the first generic Copaxone.”

Kolbert continued, “We believe MNTA is well positioned to benefit from the launch of a generic Copaxone (M356). However, the FDA approval of MNTA’s ANDA continues to be delayed as TEVA has filed its seventh Citizen Petition. Both companies will have oral arguments heard before the U.S. Supreme Court on October 15, 2014. During the 2Q14 EPS conference call, management stated that it would not comment on M356 launch plans until there is an FDA approval in hand. Management did say that a settlement with TEVA is one possible outcome. Generic Copaxone should eventually arrive, but timing is uncertain. A generic Copaxone may also represent a new alternative to other brands (expensive MS drugs) for patients and managed care, expanding the market beyond just existing Copaxone. On the call, Teva highlighted damage risk in the billions as a threat to generic makers.” 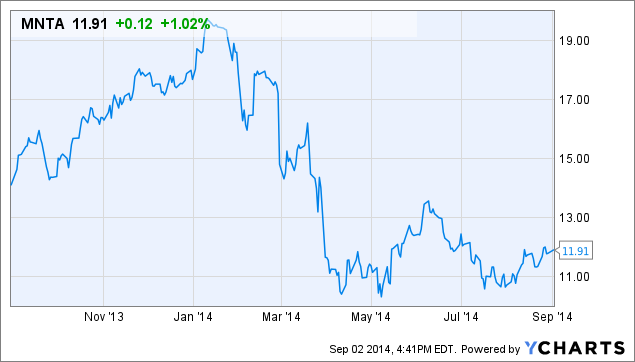