In a research report sent to investors today, Cantor Fitzgerald analyst Irina Rivkind maintained a Hold rating on Ligand Pharmaceuticals (NASDAQ:LGND) with a $49 price target, as the company updated its 3Q:14 guidance to revenues of approximately $15M and adjusted EPS between $0.33 and $0.37 versus FactSet consensus of $14.2M and $0.32, respectively. This update comes ahead of Ligand’s third quarter earnings release on Oct 27.

Rivkind noted, “While the business remains robust, we view this “pre-announcement” as a shuffling of the deck chairs since the company is not raising expectations for 2014 and benefited from some small upfront licensing payments as well as a $0.55M milestone for Noxafil in 3Q:14 which may be offset by slightly lower-than-expected license payments or Captisol sales in the next quarter. We maintain our HOLD rating and $49 PT and are not expecting near-term upward stock momentum. We also lowered stock-based compensation in our model which also led to reductions in non-GAAP EPS estimates.” 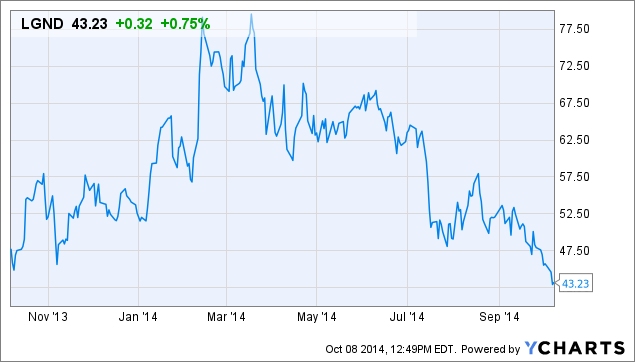