Krispy Kreme: We Believe The Shares Are Attractively Priced And Should Be Accumulated, Says Roth Capital

In a research report issued today, Roth Capital analyst Anton Brenner reiterated a Buy rating on Krispy Kreme Doughnuts (NYSE: KKD) with a price target of $27 ahead of the company’s release of its second-quarter results. Brenner estimates that the company will have revenue of $118.6MM and a GAAP EPS of $0.11.

Brenner noted,  The critical metric for investors in Q2 should be same-store sales. In Q1, comps declined 1.5% versus a strong double-digit gain in the prior-year period, the first quarterly decline following 21 consecutive increases. Management attributed the decrease to poor weather throughout the quarter, including during the key Valentine’s Day week. While there again is a strong year-ago comp of +10.0%, we anticipate a gain of 1%-2% in Q2, driven by attractive promotional efforts and LTOs. A stronger sales increase could be a positive catalyst for stock price performance, but another y/y comp decline would be disappointing to investors.”

Brenner continued, “With Krispy Kreme back in an expansion mode both domestically and internationally, we would look for additional franchise area development agreements in the United States to be announced. At the end of Q1, the company had a total of 260 stores in the U.S., including 163 franchised units, in 38 states and the District of Columbia. However, there are ten or more units in only seven states, leaving a lot of white space for future expansion, in our view.” 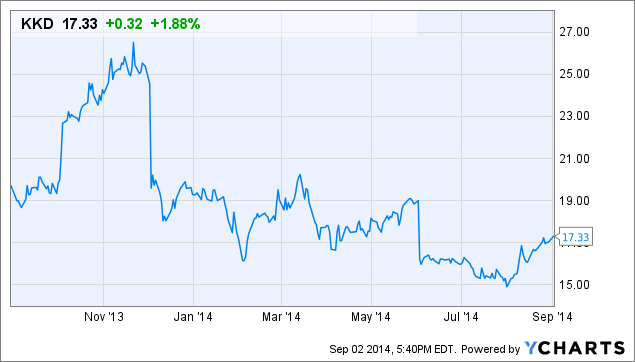