In a research report published Friday, analyst George Hill of Deutsche Bank maintained a Buy rating on Cerner (NASDAQ:CERN) with a $70 price target, on the back of a recent company alert from KLAS Research, which indicates that both Cerner and Siemens customers are excited about Cerner’s pending acquisition of Siemens, which is expected to close in Q1-15.

Hill noted, “We believe this bodes well for Cerner’s ability to retain Siemens’ current client-base, and optimistic client feedback suggests faith in Cerner’s execution capabilities. Cerner will likely improve its own revenue cycle offering, and in the long term, Cerner will likely convert users of Siemens products to those of Cerner. The analyst continued, “The data from KLAS indicates that while 14 facilities migrated away from Siemens EMR systems in 2013, only one of those hospitals went to Cerner while 11 hospitals moved to Epic. According to KLAS, Siemens customers do not see a significant gap between Cerner and Epic, and both would likely be considered in future purchasing decisions. We believe this gives Cerner a significant advantage by way of incumbency. Also, customer comments reported to KLAS indicate that some Siemens customers may now choose to stay with Siemens for a longer period of time given that Cerner likely provides a better path forward under the new leadership.”

According to TipRanks.com, which measures analysts’ and bloggers’ success rate based on how their calls perform, analyst George Hill has a total average return of -2.7% and a 46.2% success rate. Hill has a 5.9% average return when recommending CERN, and is ranked #2776 out of 3315 analysts. 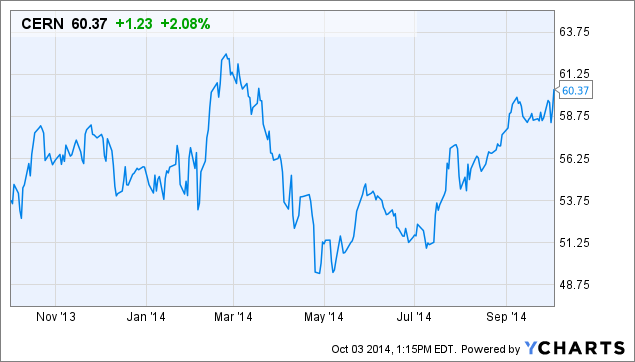