In a research report issued today, Deutsche Bank analyst Nandan Amladi maintained a Buy rating on Adobe Systems Incorporated (NASDAQ:ADBE) with a price target of $80 ahead of the company’s analyst day.

Amladi wrote, “Adobe will host its analyst day on Monday, October 6 at its Adobe MAX user conference in Los Angeles. Recent quarters have shown outperformance on the Creative Cloud subs transition, with 2.8m active users on a historical Creative Suite base of about 13m. In this note, we model out the transition and show Adobe will likely exceed the stated 4m subs target exiting 2015 to achieve the guidance of 20% Digital Media revenue CAGR through 2016. Though there could be some execution risk to the transition, we see ADBE continuing to outperform among our large- cap coverage, with valuation still attractive on a growth-adjusted basis.”

Amladi continued, “Adobe expects to add more than 500k CC subs in 4Q14, which should get the company past the 3.3m subscriber target for FY14. While Adobe’s target of 4m CC subs appears easily achievable in FY15, the 20% revenue CAGR for the Digital Media segment has more moving parts. Figure 1 shows the subscription growth, which implies. Adobe will either continue on the trajectory of 400k-500k subs net adds/quarter, or improve ASP/sub significantly to achieve its stated goal. The other lever in DMS is the ELAs (we estimate roughly 15% of DMS sales). The company currently has unbilled backlog and deferred revenue in excess of $2bn, providing solid visibility into FY15-16, as many of these contracts are ELAs with advance annual billings (deferred revenue was up 7% sequentially and 36% y/y in 3Q14). Using .our incremental margin estimates, we also model EPS sensitivity to CC subs and ASP, and illustrate how these could impact the FY16 EPS target of “>$3.00”.” 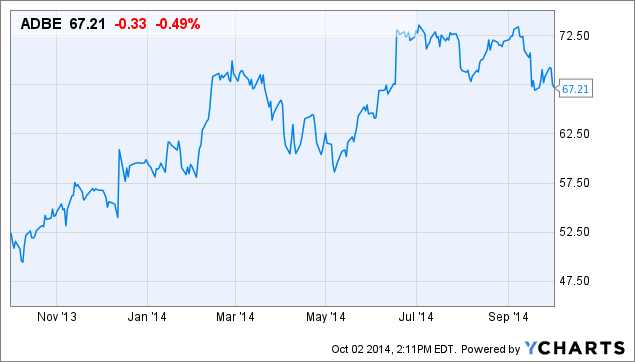