Canaccord Set Expectations On Lululemon Ahead Of 2Q14 Results

In a research report issued today, Canaccord analyst Camilo Lyon reiterated a Hold rating on shares of Lululemon Athletica (NASDAQ:LULU), with a $42 price target, ahead of the company’s second-quarter results which will be reported on Thursday, September 11.

Lyon wrote, “We are modeling EPS of $0.29, in line with consensus. We believe our comp estimate of – 4% inclusive of e-commerce could still prove to be high given the continued challenges LULU is working through to improve its product flow, overall fashion quotient, and conversion issues. In terms of gross margin, we believe there is little upside risk to our estimate of 50.5% given the generally promotional retail environment and mix of lowermargin fashion product. In our opinion, the issue with LULU is that the assortment for the most part remains stale with only brief pops of newness (e.g., &Go line). As such, it will be important to see how traffic was sustained during the quarter. Recall traffic was up last quarter but conversion was down, clearly indicating customers wanted to buy but were not inspired to do so. While we believe the brand remains relevant and has long-term growth opportunities (e.g., international, men’s, ivivva), there are likely to be more fits and starts in the interim. We remain at HOLD largely due to the extended duration of when we expect to see a re-acceleration in comps, mid-2015.”

According to TipRanks.com, which measures analysts’ and bloggers’ success rate based on how their calls perform, analyst Camilo Lyon has a total average return of 11.4% and a 66.7% success rate. Lyon has an -15.9% average return when recommending LULU, and is ranked #225 out of 3270 analysts. 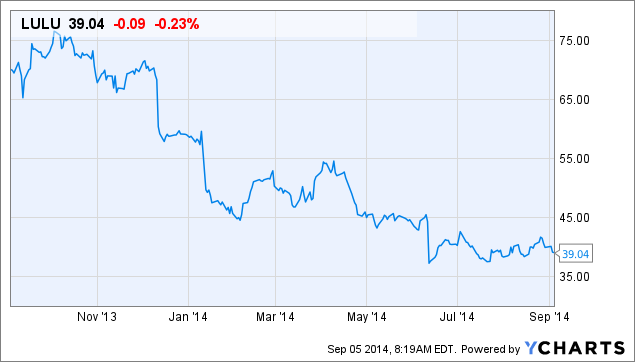