In a research report published today, analyst Jonathan Aschoff of Brean Capital maintained a Buy rating on Pacira (NASDAQ:PCRX) with a $111 price target, which represents a potential upside of 14% from where the stock is currently trading.

Aschoff said, “We attended a manufacturing site visit of Pacira and remain convinced that the combination of know how and intellectual property surrounding Exparel is enough to keep competitors at bay until well beyond the 2018 expiry of its process patent. We believe that it would take at least 7 years to independently replicate what Pacira has perfected, thus protecting Exparel a few years beyond its main process patent expiry. We note that the proper production of Exparel involves many things, such as Pacira’s optimized mixer angle, mixed speed, mix time, resulting particle sizes, mixer head geometry, mixer height, sparge rates, and the aspect ratio of the double emulsion employed generate multivesicular particles, to name a few. The custom parameters surrounding doing the second emulsion are critical to keep the particles from falling apart (a first emulsion surrounds drug with a lipid monolayer and the second “bags” many of the droplets into a larger 10-60um particle surrounded by another lipid monolayer). Scale up also requires the ability to robustly reproduce batches on a smaller scale. For these reasons, we believe Exparel is insulated from generic competition until the early 2020s. Given how interconnected the individual parts of the Exparel manufacturing process is, changing anything is essentially equivalent to changing everything. The delayed launch of Exparel to 2Q12 versus 2011 speaks to the difficulty in manufacturing the product. Pacira also has responded to its FDA Warning Letter.” 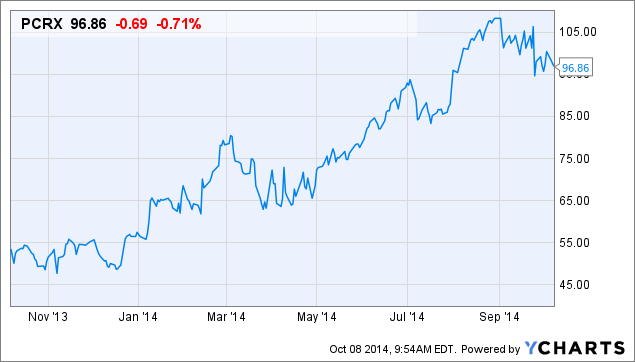