Cisco Systems (CSCO) stock has been volatile following the last 10 quarterly reports, with an average move of 9%, according to Evercore analysts Mark McKechnie and Zachary Amsel, in a report dated August 11, 2014. Analysts expect ‘beat and keep’ results for the July quarter, based on “US enterprise solid and emerging markets stabilizing amidst 1H weighted US carrier spend” and the limited exposure of Cisco in China.

According to the Evercore analysts, key products cycles include: Nexus 9K/ACI, which will add marginal value to the coming several quarters, but at decent margins; and the CRS-X core router, which started retailing in the first half. They expect July to be another strong quarter for the router, expecting an increase of 7% quarter over quarter following up 11% quarter over quarter in April.

The company’s high-end routers and switches are performing well with an increase in orders for the NCS and CRS-X better than expected against the three-quarter negative trend. The analysts expect another quarter at least of Cisco router cycle, but are concerned over the SDN headwind for both switches and routers McKechnie and Amsel also expect Cisco to continue dominate the broader enterprise accounts owing to aggressive pricing and easier integration, which could result in “muted revenue and longer-term margin pressure.”

Management has given a strong guidance for the revenue to increase at 5.4% quarter over quarter at the mid-point compared to a 5-year average of 3%. Gross margin is forecast to come in at the upper-end of Cisco’s 61-62% guidance “on a mix shift towards router and cost discipline,” McKechnie and Amsel note.

For the October quarter, Evercore is looking for an in-line guidance relative to the Street’s estimates of $0.53 on $12.1 billion, a drop of 0.5% quarter over quarter, but below analysts’ estimates of an increase by 2% quarter over quarter and 5-year average of upside of 1% “as healthy enterprise trends (~ 65% of sales) and router/data center product cycles are offset by US carrier capex trends.”

Also, ` is expected to continue with $4 billion in dividends and $4 billion in buybacks, which is in-line with the company’s 50%+ investor return policy. 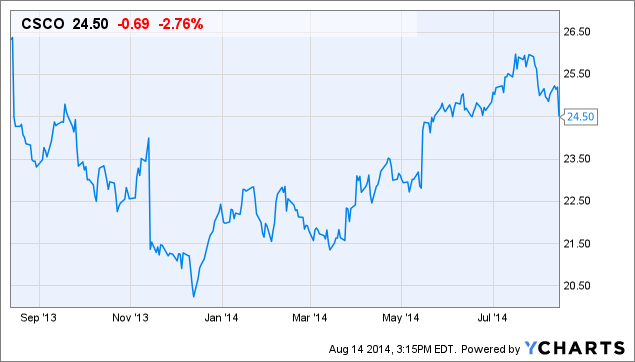