EDAP announced that it has received FDA clearance for its Focal One device for the ablation of prostate tissue. Specifically, the Focal One high intensity focused ultrasound (HIFU) device is the first medical apparatus designed specifically for focal treatment of the prostate. Focal One fuses MR and 3D biopsy data with real-time ultrasound imaging, which allows urologists to view integrated, detailed 3D images of the prostate on a large monitor and direct high intensity ultrasound waves to ablate the targeted area.

With Focal One, urology surgeons can establish precise contours around the diseased tissue and ablate an even smaller portion of the prostate.  This lessens the damage to healthy tissue, and minimizes side effects of incontinence and impotence for patients.  Using Focal One, surgeons can customize the HIFU procedure for each patient and each clinical condition.

H.C. Wainwright analyst Swayampakula Ramakanth commented, “We believe that potential buyers who have held off on purchasing Ablatherm in anticipation of Focal One approval will respond positively to this news and expect to see significant growth in HIFU sales in the US in 2H18. We currently expect EDAP’s total revenues to grow to €97.2M in 2026 from €38.5M in 2018.”

“With the expected launch of Focal One, EDAP would have three HIFU devices in the market by the end of 2018. These devices would be able to serve the needs of a wider spectrum of urologists depending on the sophistication they would require in treating their patients. Additionally, with the recent decision by CIGNA to reimburse HIFU as a salvage therapy for prostate cancer, we expect to see wider adoption of HIFU in the next two years. We continue to expect that additional private payers will follow suit and for HIFU to achieve a wide reimbursement in the US by 2020,” the analyst continued.

Net net, Ramakanth reiterates a Buy on EDAP stock, with a $6.50 price target, which represents a potential upside of 80% from current levels. (To watch Ramakanth’s track record, click here) 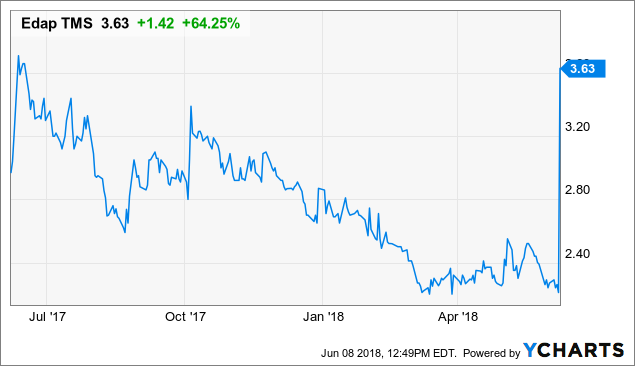