Uh Oh, Roku Inc Has a New Bear in Town

Roku Inc (NASDAQ:ROKU) may have served up a more robust than anticipated third quarter performance, but has the market taken the bullish reaction too far? Shares had shot up around 200% ever since ever since the streaming device maker delivered a stellar earnings showcase, but on Thursday, the market sang a different tune. Roku has a new bear on its hands, who caused valuation to take a close to 8% hit Thursday in the wake of the downgrade. Notably, YouTube and Netflix are two of Roku’s leading “channels,” and yet they fail to yield “material” revenue for Roku, Morgan Stanley analyst Benjamin Swinburne writes. Consider that Roku’s valuation hovers above 17 times over forecasted platform sales for this year; a value that this once cautious analyst now finds just too “hard to justify.”

In reaction, the analyst downgrades from Equal Weight to an Underweight rating on ROKU stock while bumping up the price target from $25 to $30, which implies a nearly 37% downside from current levels. (To watch Swinburne’s track record, click here)

Though Roku’s third quarter turnout exhibited “impressive momentum in active account and engagement growth,” the analyst believes that in a nutshell, “the market has overreacted.”

Notably, Roku “must negotiate for greater economic share from its content partners over time and then sell that inventory to advertisers,” the analyst comments, adding that with 5,000 programming channels accessible, “the top five represent 70% of time spent,” with YouTube and Netflix showcasing “the greatest engagement and monetization.” Yet, these giants do not have high probabilities to bring big revenue gains to the table for Roku, Swinburne explains.

Overall, “Two of the content partners generating the greatest engagement and monetization, such as Netflix and YouTube, have historically not generated material revenues for Roku. This is presumably because these services have the leverage in their negotiations with Roku and other hardware platforms to keep it all to themselves. If market share on consumer time spent increasingly shifts towards these larger scale players (e.g. Netflix, YouTube) and away from the long-tail, we believe Roku’s monetization opportunity could be more limited than the stock is pricing in today. Already consensus assumes platform revenues roughly triple from ’17E to ’20E,” the new bear concludes, finding that the company’s earnings power down the line seems “less clear.”

TipRanks shows a Wall Street that largely goes to the bears on Roku’s market opportunity. Based on 5 analysts polled in the last 3 months, only 1 is bullish on Roku stock, 1 remains on the sidelines, and a majority of 3 are bearish, running for the hills. Is the stock undervalued or overvalued by these analysts’ expectations? With a loss potential of nearly 26%, the stock’s consensus target price stands at $35.33. 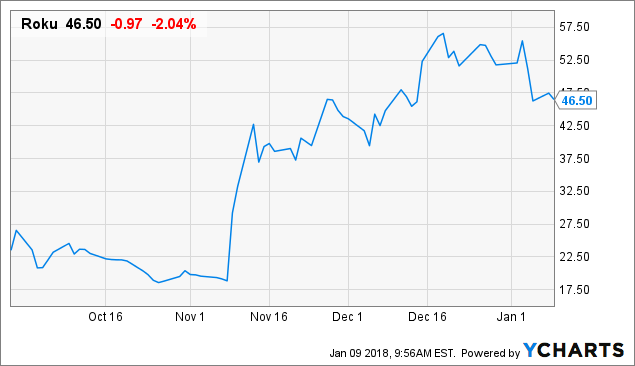