The House of Mouse decided to take over some Fox assets in a $66 billion deal, which includes $52 billion of equity. One voice on the Street believes this bodes quite well for Roku Inc (NASDAQ:ROKU), as the digital streaming business is set to benefit economically as well as via “heavy DIS marketing spending on audience promotions.”

Needham analyst Laura Martin welcomes the “positive implications” of the deal for ROKU, believing with not just one, but two new over-the-top (OTT) media services on Roku’s table, the company will gain direct payments, ad revenue from Disney’s “world class” marketing skills, and a subsequent boost in traffic.

In reaction, the analyst reiterates a Buy rating on ROKU stock with a $50 price target. (To watch Martin’s track record, click here)

From Martin’s eyes, Disney’s acquisition of Fox assets proves advantageous to Roku, as “it implies two new deep-pocketed OTT networks will be added to ROKU’s OTT aggregation platform, more traffic coming to the ROKU platform, and DIS spending marketing dollars with ROKU and giving ROKU a rev share for the first time ever. Also, only two services pay ROKU almost nothing (because they were first), Netflix and YouTube. We expect ROKU to successfully negotiate its normal 20% rev share with any new DIS OTT channels. Therefore, the more subs that DIS’s sports or entertainment services take away from Netflix, or viewership away from YouTube, the more ROKU benefits economically from that mix shift. Also, those services might buy more advertising on ROKU to slow defections.”

Comparing the platform to a “shopping mall,” the analyst notes that indirectly, the company is essentially “adding a really big anchor tenant or two as DIS launches its own OTT Networks.” Considering the company’s main source of revenue pours in from ad sales on a CPM basis, Martin concludes that with a surge in people, and then traffic hitting the ROKU platform, “the more money it makes,” in a nutshell.

It seems Martin is not the only one betting on Roku, as CNBC’s “Mad Money” host Jim Cramer is amazed by this standout short squeeze. Though Cramer notes many are not willing to take the gamble in fear Amazon is angling to stomp Roku out of the competitive playing field, he sees this stock to date as a real “winner.” As such, Roku investors are buying into the buzz, with shares rapidly gaining 11% since yesterday.

However, TipRanks highlights a Wall Street largely surveying Roku from the sidelines, an even split between the bulls, the bears, and the cautious. Out of 5 analysts polled in the last 3 months, 1 rates a Buy on Roku stock, the majority of 3 maintain a Hold, while 1 issues a Sell on the stock. With a loss potential of nearly 45%, the stock’s consensus target price stands at $31.00. 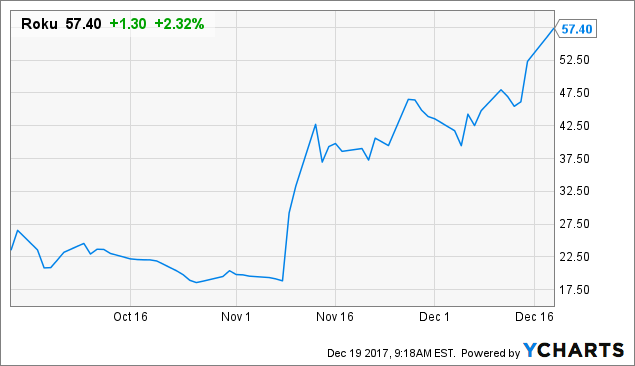