Yesterday, EndoChoice Holdings Inc (NYSE:GI) that it entered a definitive agreement to be acquired by Boston Scientific for $8 per share, a total company valuation in the ballpark of $210 million.

William Blair analyst Margaret Kaczor sees this as a “reasonable price for the asset,” while acknowledging the acquisition price also falls below the “recent average 4.6 times projected 2017 revenue for med tech company acquisitions.” As such, the analyst reiterates a Market Perform rating on GI without listing a price target.

Between Boston Scientific’s medical-devices company, which has an endoscopy business, and GI’s goals to “expand the reach” of its “large single-use products business globally,” Kaczor assesses this to be a mutually beneficial acquisition.

“From a product perspective, we believe the rationale for the deal for Boston Scientific was to gain access to EndoChoice’s industry-leading SUP and pathology businesses. We do not see significant product overlap with Boston’s existing portfolio and EndoChoice’s portfolio of hundreds of products specializing in devices and infectioncontrol products.”

“We do not see another bidder as likely at this point,” Kaczor concludes. The acquisition is anticipated to close by fourth-quarter and “be breakeven to earnings in 2017 and accretive thereafter,” the analyst notes.

According to TipRanks, which measures analysts’ and bloggers’ success rate based on how their calls perform, four-star analyst Margaret Kaczor is ranked #725 out of 4,185 analysts. Kaczor has a 67% success rate and yields 11.4% in her yearly returns. However, when recommending GI, Kaczor loses 70.0% in average profits on the stock.

Additionally, Guggenheim analyst Christopher Pasquale rates a Buy on GI with a price target of $26.00, which represents just under a 226% increase from where the stock is currently trading. 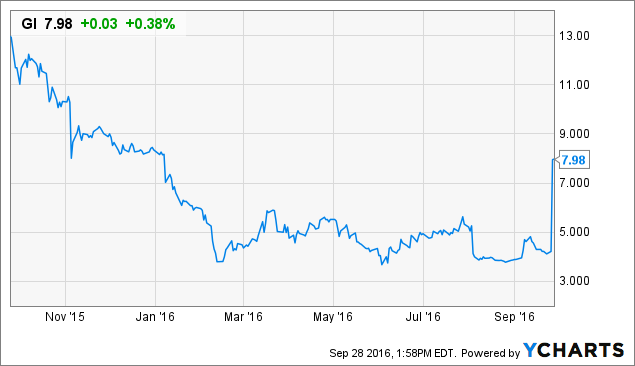