While consensus had been angling for Sarepta’s second full quarter of Exondys 51 to yield $22.5 million, the firm powered through with a 114% quarterly rise to a hefty $35 million, leading management to boost full year 2017 guidance now for the second time in a year, rising from “exceeding 95 million” to an even more bullish range of $125 million to $130 million. William Blair analyst Tim Lugo highlights strong commercial trends that also led Sarepta to beat his own forecast of $20 million.

On back of the “impressive” beat, the analyst reiterates an Outperform rating on shares of SRPT without listing a price target. (To watch Lugo’s track record, click here.)

Lugo asserts, “We continue recommend shares of Sarepta as we remain impressed with the launch of Exondys 51 to date. We also recommend investors look beyond Exondys with Sarepta entering seven compounds into clinical development in 2018. The company is very clearly in the leadership position in the DMD space and we view Vertex’s (VRTX $159.69; Market Perform) success in cystic fibrosis as the best comparison for what Sarepta may eventually become.”

This quarter saw Sarepta settle a global intellectual property licensing agreement with BioMarin Pharmaceuticals for Exondys 51, launch a DMD Managed Access Program in various countries, as well as secure debt financing to the tune of $100 million. The analyst commends Exondys 51 sales trends that proved to be more robust than initially anticipated. Taking steady sales and royalties to BioMarin under account, the analyst has taken his prior forecast of $101 million in full year 2017 top-line revenues up to $130 million.

TipRanks analytics demonstrates SRPT as a Strong Buy. Out of 9 analysts polled by TipRanks in the last 3 months, 8 are bullish on Sarepta stock while 1 remains sidelined. With a return potential of 51%, the stock’s consensus target price stands at $61.86.

Efficacy Should Be a “Slam Dunk” for Dynavax

Dynavax Technologies Corporation (NASDAQ:DVAX) hepatitis B vaccine Heplisav is nearing the gates of approval, as its August 10th date with destiny, a.k.a. the FDA’s Vaccines and Related Biological Products Advisory Committee (VRBPAC) hangs in the wings. William Blair analyst Y Katherine Xu deems 70% probability of approval for the hepatitis B vaccine, and that no matter how the verdict falls, the decision will enable the immune-oncology aspect of the business to set free its true valuation.

Predicting that should Dynavax gain the green light from the FDA, $650 million in peak sales could wait for Heplisav, the analyst reiterates an Outperform rating on DVAX without suggesting a price target. (To watch Xu’s track record, click here.)

Xu opines, “Heplisav’s long road to approval should reach its end by August 10, with an FDA panel on July 28 to provide a strong indication of the likelihood of approval. The release of the briefing document on July 26 may affect the stock depending on the content and tone. On a positive outcome, we estimate Dynavax shares to trade above $30 over time, and if negative, the stock could have about 25% downside, since the oncology franchise is providing some floor for the valuation, in our opinion.”

Moreover, glancing past prospective approval, “If approved, we believe Heplisav would become standard-of-care in the adult hepatitis B vaccine market, with superior efficacy and an easier dosing schedule as compared with the incumbent Engerix-B (GlaxoSmithKline [GSK $42.42]),” continues the analyst.

Ultimately, Xu’s conclusion on Dynavax keeps ringing with bullish sentiment, as she contends, “Given the clear superiority in immunogenicity that Heplisav demonstrated over Engerix-B in the overall adult population and in almost all subgroups, we believe the efficacy vote at this panel will be clear cut, and safety will remain the focus of the debate.” 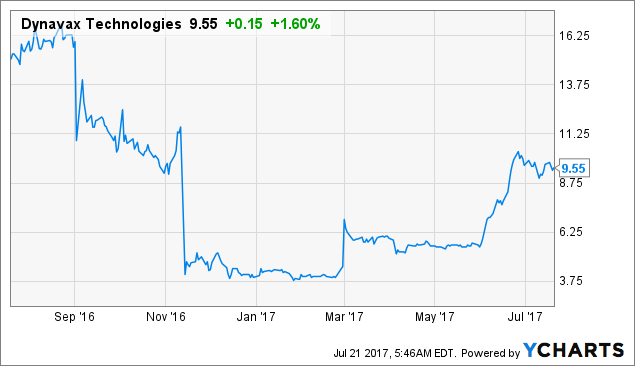 William Blair analyst Andy Hsieh is chiming in with a bullish take on Exelixis, Inc. (NASDAQ:EXEL) following an amendment to the biotech firm’s global collaboration agreement with Genentech to develop and commercialize Cotellic, a drug approved to be used in a combination treatment for metastatic melanoma. As of the first of the month, the average of the Cotellic quarterly net selling price will also be taken with branded Genentech products, rather than before where only the Cotellic component of the combination had been noted in calculating profits and losses.

As such, the analyst sees an approximate 33% rise in revenue recognition for the Cotellic collaboration as far as profits and losses starting this month. Gearing up for chances for greater upside with cancer immunotherapy drug meta Tecentriq continuing in combination trials, Hsieh sees a gilded road ahead for Exelixis.

Particularly considering this new amendment spells out quite the win/win scenario for the biotech firm from the analyst’s eyes, who underscores an advantageous one-two punch of better revenue potential meets lowered cost responsibility, the analyst reiterates an Outperform rating on the stock without indicating a price target.

Overall, “[…] Exelixis’s cost responsibility will go down as more drugs are being combined with Cotellic. Based on Bloomberg Symphony data, the monthly wholesale acquisition costs (WAC) of Cotellic, Zelboraf, and Tecentriq are roughly $6,500, $10,800, and $12,400, respectively. We note that the actual revenue recognized in the profits and losses will likely be lower due to the negative impact of discounts and rebates. As a result, we see a 33% potential increase (Cotellic’s $6,500 and average price of Cotellic and Zelboraf of $8,650) in revenue recognition, assuming similar gross-to-net adjustments across products. In addition, while still in Phase III development, the triple combination (Cotellic, Zelboraf, and Tecentriq) has an average monthly WAC of $9,900 and could contribute a 52% increase in revenue recognition to Cotellic monotherapy,” Hsieh surmises.

TipRanks analytics demonstrate EXEL as a Buy. Based on 4 analysts polled by TipRanks in the last 3 months, 2 rate a Buy on Exelixis stock while 2 maintain a Hold. The 12-month average price target stands at $28.50, marking a nearly 6% upside from where the shares last closed.