Achaogen Inc (NASDAQ:AKAO) shares rose 14% today after the company reported positive top-line results from the phase 3 trial of its treatment for urinary tract infections. The company expects to submit a new drug application (NDA) to the FDA in second half 2017, and a marketing authorization application (MAA) to the EMA in 2018.

In reaction, William Blair analyst Y Katherine Xu raised her price target to $25 (from $11), while reiterating an Outperform rating on AKAO.

Xu commented, “We believe these data strongly support approval in the United States and Europe and have raised our probability of commercialization both the EPIC and CARE study populations to 95% from 85% and 70%, respectively. Achaogen will submit an NDA to the FDA in second half 2017, and an MAA to the EMA in 2018.”

According to TipRanks.com, which measures analysts’ and bloggers’ success rate based on how their calls perform, analyst Y Katherine Xu has a yearly average return of -1.5% and a 42% success rate. Xu ranked #3215 out of 4269 analysts.

As of this writing, all the 3 analysts polled by TipRanks rate Achaogen stock a Buy. With a return potential of 28%, the stock’s consensus target price stands at $19. 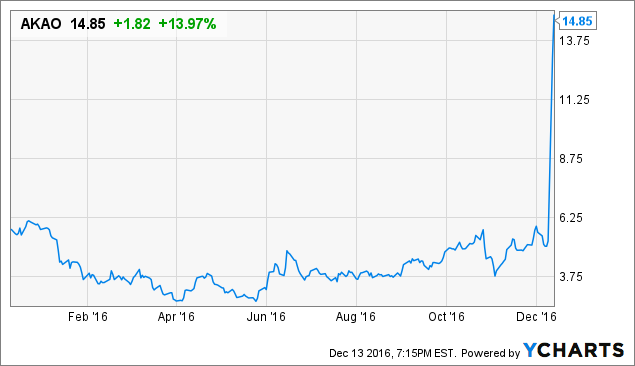