William Blair analyst Y. Katherine Xu remains on the sidelines with shares of Tokai Pharmaceuticals, Inc. (NASDAQ:TKAI), after the pharma firm released its second-quarter results and provided investors with an update on its clinical progress.

From Xu’s standpoint, TKAI does not face promising horizons as she finds the future of the firm “uncertain” at best following a failure of the Phase III ARMOR3-SV trial to meet its primary endpoint. Xu reiterated a Neutral rating with a price target of $2.00.

Xu weighs in, “After the premature halt of the ARMOR3-SV study due to futility, the company will analyze the data to determine if any potential path forward for galeterone is in the interest of shareholders. We believe the company could become a target for a reverse merger in the near future.” In particular, Xu highlights the company’s lead asset, galeretone, a highly-selective oral small molecule designed to treat prostate cancer, and whether it can fare well as it is tested to see if patients who failed in therapy from competitors, such as Medivation’s Xtandi and Johnson & Johnson’s Zytiga.

However, for Xu, hopes should not get carried away into any stratospheres, as the analyst believes the real cure for prostate cancer will lie in eventual drug combinations that stimulate the immune system, “rather than sequential treatment with agents of similar mechanisms.” This halt certainly from the analyst’s standpoint does not bode well for Tokai, especially when galeretone is the company’s key driver of momentum.

TipRanks analytics exhibit TKAI as a Hold. 100% of analysts polled in the last 3 months maintain a Hold on Tokai. 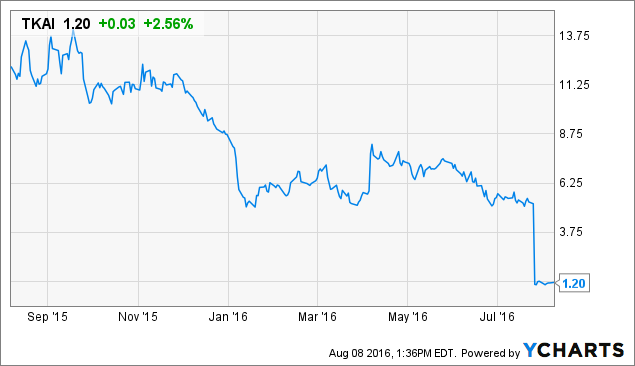