Canaccord analyst Neil Maruoka is out with a cautiously optimistic research note on Valeant Pharmaceuticals Intl Inc (NYSE:VRX) in light of a fight from the biotech giant to make a comeback amid tremendous debt overhang. Though Maruoka still deems Valeant’s profile one that warrants “higher risk,” he recognizes the biotech player’s solid move to offer 5.50% senior secured notes tagged at $1 billion in collective principal amount due in eight years.

The profits will help Valeant coupled with cash on deck to help steer the ship to buy back $1 billion in aggregate principle of certain outstanding notes. Moreover, gains from extending these debt maturities at cheaper rates will enable Valeant to buy back portions of its 5.375%, 6.375%, and 7.000% senior notes due in three years through cash Tender Offers.

Maruoka highlights, “The new notes offering will add an additional five years to the maturity of the repurchased debt, providing additional breathing room as the company continues to de-lever. Further, we believe that the reduced interest burden assists as the company manages growth and cash flow expectations.”

This could prove to be advantageous for Valeant, as the analyst comments, “Not surprisingly (given progress to date), management expects to exceed its goal of paying down $5 billion of debt by February 2018.”

However, not all the path is clear for the giant just yet, as the analyst still expects for outlook to be taken down throughout the rest of 2017. Even though the VRX team set new adjusted EBITDA outlook for the year ahead of the Street as well as Maruoka’s forecasts, the guide includes the pro-rated 2017 EBITDA contribution from segments like iNova and Obagi that were just sold. As such, the analyst will not be surprised to see guidance cut by the end of the year.

In addition, the analyst is pleased to see some resolution to manufacturing challenges that resulted in a CRL for Vyzulta, believing now the “NDA could be back on track.” Ultimately, “Although the timing of an approval remains uncertain, we believe that Vyzulta could be launched in the US sometime next year,” contends Maruoka.

For now, the analyst reiterates a Hold rating on VRX stock with a price target of $16, which represents a 12% increase from where the stock is currently trading. (To watch Maruoka’s track record, click here)

Most of the Street backs Maruoka’s torn sentiment between supporting the troubled biotech giant, but remaining unconvinced of a full turnaround quite yet, as TipRanks analytics showcase VRX as a Hold. Out of 14 analysts polled by TipRanks in the last 3 months, 3 are bullish on Valeant stock, 8 remain sidelined, and 3 are bearish on the stock. With a return potential of 31%, the stock’s consensus target price stands at $18.83.

RedHill Dares the Risk Factor for Saved Time and Dollars

However, as far as Roth Capital analyst Scott Henry trumpets from a bullish platform, RedHill may be trading in a momentary bump up in risk factor (and clearly short-term stumble in investor sentiment), but the reward points to about a year and approximately $14 million saved for the program for RHB-104- a risk/reward scale balanced in the firm’s favor. Henry wagers, “We find this to be a favorable trade off,” who notes that “for a program that currently receives only modest investor enthusiasm,” savings scaling to $14 million will be meaningful.

“Reducing [the] size of [the] Crohn’s trial saves time and money,” explains the analyst.

All the same, Henry nonetheless anticipates a confirmatory trial on the heels of the beginning Phase III trial before RedHill files for an NDA. Because less patients will be in the trial, the powering of the trial will subsequently come down from 90% to about 80% for RDHL to indicate a 15% treatment impact.

RedHill stands by the trial size cut back, as the analyst notes, “The company appears to believe that this increased risk is warranted given favorable pooled efficacy rates that ‘suggests that the total number of treatment successes is consistent with predefined expected treatment outcomes’. We are hesitant to speculate on pooled, blinded, data as its predictability can be highly speculative.”

Ultimately, this is “worth a shot” and Henry continues to be positive on the biotech player’s prospects, anticipating top-line results for RHB-104 by the middle of next year.

Henry maintains a Buy rating on shares of RDHL with a $27 price target, which implies a 184% increase from current levels. (To watch Henry’s track record, click here) 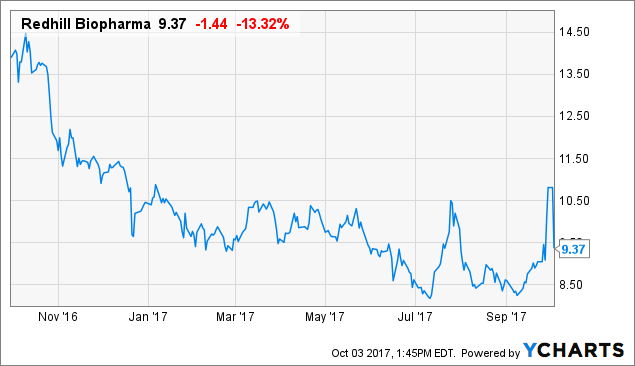