Canaccord analyst John Newman points out that the 72 mcg dose for Linzess did not address the high diarrhea rate seen for the 145 and 290 mcg doses, conferring a major safety advantage to Trulance.

Newman wrote, “Linzess at 72 mcg showed less efficacy and more diarrhea vs. Trulance, a win for SGYP’s Trulance in our view. Linzess 72 mcg showed 13% CSBM response vs. 5% placebo in the recent Phase 3, lower than Trulance’s 21%, and Linzess’ 20% seen in Phase 3.”

Furthermore, “The poor data for the 72 mcg Linzess dose explains why IRWD and AGN received initial data in October of 2015 but never presented details for “competitive reasons”. We believe the 72 mcg data are not competitive, hence the data were not released until the FDA approval today.”

Subsequently, Newman reiterates a Buy rating on shares of Synergy Pharmaceuticals with a price target of $13, which represents a potential upside of 134% from where the stock is currently trading.

According to TipRanks, a site that tracks and ranks analysts on their predictions, analyst John Newman has a yearly average return of -14.3% and a 30.5% success rate. Newman has a 22.6% average return when recommending SGYP, and is ranked #4314 out of 4378 analysts.

Out of the 6 analysts polled in the past 12 months, 5 rate Synergy Pharmaceuticals stock a Buy, while 1 rates the stock a Hold. With a return potential of 101%, the stock’s consensus target price stands at $11.17. 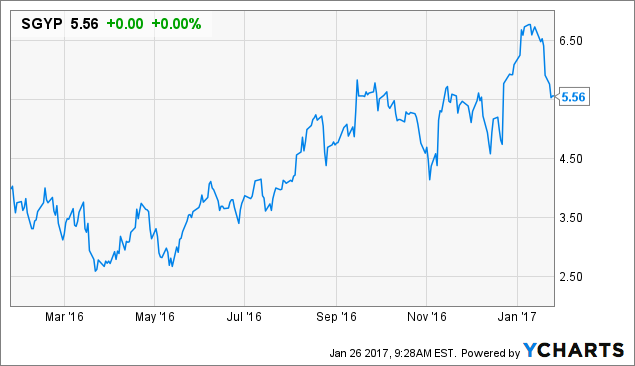