Analyst spotlights a compelling commercial future ahead for Sorrento's ZTlido in post-herpetic neuralgia.

Sorrento Therapeutics Inc (NASDAQ:SRNE) had a promising month, with the FDA accepting a New Drug Application (NDA) for the biotech firm’s 1.8% lidocaine patch ZTlido, a non-opioid asset designed to relieve pain for patients who suffer from post-herpetic neuralgia (PHN).

By the end of August, Sorrento’s pain subsidiary Scilex Pharmaceuticals had submitted its NDA application to the agency for review once again and likewise has plans to submit a marketing authorization application (MAA) for the lidocaine patch in Europe by the fourth quarter of this year.

ZTlido’s date with FDA approval destiny hangs in the balance at the end of February, and H.C. Wainwright analyst Ram Selvaraju takes all of this in stride, rooting for Sorrento to succeed with its lidocaine patch contender.

Selvaraju writes, “In keeping with our guidance for the FDA review process to take six months, the agency assigned a […] (PDUFA) action date of February 28, 2018, to the ZTlido NDA. Commercial launch of ZTlido in the U.S. may follow after regulatory approval, in our view. We believe that Scilex could elect to pursue such a launch in the U.S. using a proprietary or contract sales force, and that such an effort could, if the drug were approved, be under way by mid-2018.”

Moreover, the analyst points to a comparative adhesion performance trial that revealed ZTlido to be “superior” in its adhesive properties against its EU frame of reference Versatis. This is another compelling leg-up for Sorrento, as the analyst believes, “In our view, the favorable comparative adhesion data should bode well for the commercial future of ZTlido, since the active drug (lidocaine) is contained in the adhesive and must be in contact with the skin to ensure effective delivery.”

Glancing ahead, should Sorrento’s ZTlido gain FDA approval in February, it could be raking in opportunity in a “substantial lidocaine patch market.” Consider that domestically and in Europe, last year’s sales of presently approved prescription lidocaine patches circled a whopping $750 million. Ultimately, “Given ZTlido’s competitive advantage we see, we believe this product should be able to carve out a meaningful market share if approved,” underscores Selvaraju.

As such, the analyst assumes a Buy rating on SRNE stock with a price target of $20, which implies a just under 1,030% increase from where the shares last closed. (To watch Selvaraju’s track record, click here)

Additionally, according to TipRanks, Mark Breidenbach of Oppenheimer is also bullish on Sorrento, rating a Buy on the stock with a $7 price target, marking a 295% increase from where the shares last closed. 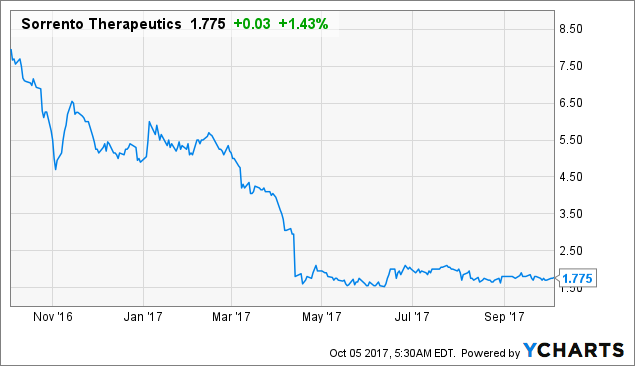 This Analyst Sees a 14-Bagger in Sorrento (SRNE) Stock