Kite Pharma Inc (NASDAQ:KITE) shares are on the run, after the drug maker announced the much-awaited top line results from its Phase 2 ZUMA-1 trial of KTE-C19 in patients with r/r DLBCL, which were an overwhelming success. Kite shares are currently trading at $78.76, up $7.99 or 11.29%.

In reaction, Roth Capital analyst Mark Breidenbach boosted his price target to $83 (from $68), while reiterating a Buy rating on the stock.

Breidenbach commented, “With durability data nowin hand, we believe the company has compelling data to support its BLAapplication process, which we expect to be completed in March.”

“We have updated our model to reflect our conviction in the KTE-C19 asset in the DLBCL market, based on the top line 6-month results from the ZUMA-1 trial. Changes to our model include an increase in the risk adjusted probability of commercialization to 95% (previously 85%). We have also increased the POS for other KTE-C19 indications due to the strong data. Based on guidance from the company during the 4th quarter earnings call, also on we have shifted out revenues of KTE-C19 to begin in 1Q18 (previously 3Q17),” the analyst added.

Out of the 15 analysts polled in the past 12 months, 11 rate Kite Pharma stock a Buy, while 4 rate the stock a Hold. With a downside potential of 5%, the stock’s consensus target price stands at $73.55. 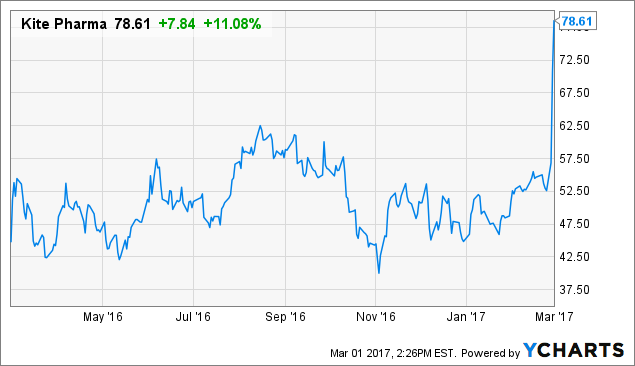