AEterna Zentaris Inc. (USA) (NASDAQ:AEZS) shares are collapsing 60% after underwhelming investors who had been optimistic about the company’s ZoptEC Phase 3 clinical study. However, AEZS announced that the endometrial cancer drug did not achieve its primary endpoint of demonstrating a statistically significant increase in the median period of overall survival of patients treated with Zoptrex as compared to patients treated with doxorubicin.

In reaction, Maxim analyst Jason Kolbert slashed his price target from $11 to $2.00, while reiterating a Buy rating, as he believes the current price still offers a good opportunity, with the company moves closer to filing the NDA, (3Q17) for Macrilen.

“Valuation now is driven by Macrilen. Our adjusted model shows fair value at $2, as such we believe the Buy rating is justified,” Kolbert noted,.

According to TipRanks, which measures analysts’ and bloggers’ success rate based on how their calls perform, analyst Jason Kolbert has a yearly average return of -11.9% and a 31.5% success rate. Kolbert is ranked #4513 out of 4569 analysts.

As of this writing, all the 3 analysts polled by TipRanks (in the past 12 months) rate Aeterna Zentaris stock a Buy. With a return potential of 391%, the stock’s consensus target price stands at $6.50. 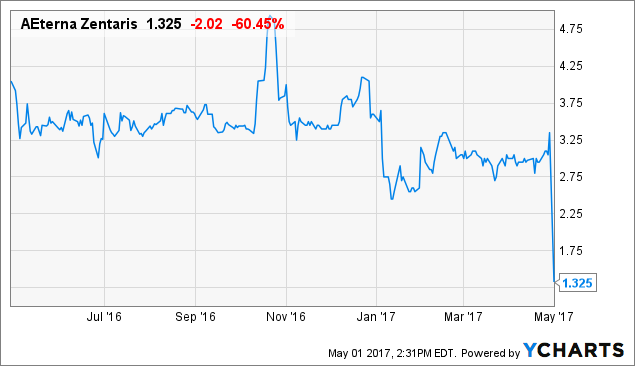