After a third-quarter earnings release yesterday, Maxim analyst Jason Kolbert was out pounding the table on Amedica Corporation (NASDAQ:AMDA), reiterating a Buy rating on AMDA with a price target of $5.00, which represents just under a 584% increase from where the shares last closed.

From the analyst’s perspective, silicon nitride is set to be the “next evolution” in biomaterials used for surgical implants, and this company is the sole FDA-approved and ISO-certified silicon nitride medical device manufacturing facility owner, already producing $20 million in yearly revenues from its products.

Kolbert believes, “More spinal fusion products are expected to be launched over the next year, and Amedica could hit breakeven, ~$30 million in revenues by year-end 2017. The U.S. market is valued at $2 billion and dominated by plastics like PEEK. As silicon nitride is more durable, stronger, resistant to fracture and corrosion, is antibacterial and actually fuses with bone, surgeons will likely continue to adopt Amedica’s products, growing the top line, in our view.”

“Biomaterials are continuously evolving. We believe the shift from plastics to silicon nitride is inevitable, but is still in its early days. As such, we see Amedica shares as undervalued given the market potential. With a growing revenue stream that has already reached $20 million, we see a fundamentally attractive story,” Kolbert concludes.

According to TipRanks, which measures analysts’ and bloggers’ success rate based on how their calls perform, analyst Jason Kolbert is ranked #4,076 out of 4,200 analysts. Kolbert has a 26% success rate and faces a loss of 16.1% in his yearly returns.

Additionally, analyst Michael Matson of Needham rated a Buy on AMDA without listing a price target. 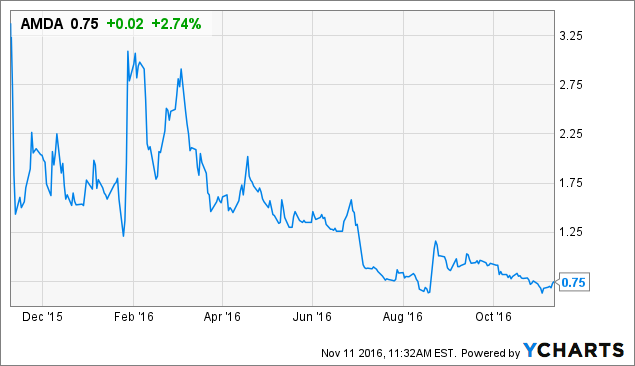 Amedica (AMDA): Shoring Up the Balance Sheet by Selling Stock Comes with a Price

Amedica (AMDA): Did You Feel the Ground Shake, Too?