Acorda Therapeutics Inc (NASDAQ:ACOR) shares rose 13% in Thursday’s trading session, after the drug maker announced topline data for CVT-301, an inhaled levodopa therapy for episodic treatment of off episodes in Parkinson’s disease, from its Phase 3 registrational study (SPAN-PD). The trial met the primary endpoint of placebo-adjusted mean change in UPDRS-3 score at 30mins for the 84mg dose.

J.P. Morgan analyst Cory Kasimov commented, “The best case scenario is still in play as we await the decision on both the IPR and ANDA filers (expected in March and any day now, respectively). We expect today’s stock move to be somewhat mitigated while we wait to see what happens on the legal front. It will also be important to get a better appreciation for the overall clinical meaningfulness of the 301 data following presentation at a medical meeting/KOL feedback. That said, we believe risk/reward for ACOR shares remains skewed to the upside on the heels of this latest development and into the admittedly difficult to predict IP decisions.”

As such, Kasimov reiterates an Overweight rating on shares of Acorda Therapeutics with a price target of $32, which implies an upside of 38% from current levels.

Out of the 10 analysts polled in the past 12 months, 4 rate Acorda Therapeutics stock a Buy, 5 rate the stock a Hold and 1 recommends a Sell. With a return potential of 39%, the stock’s consensus target price stands at $32.13. 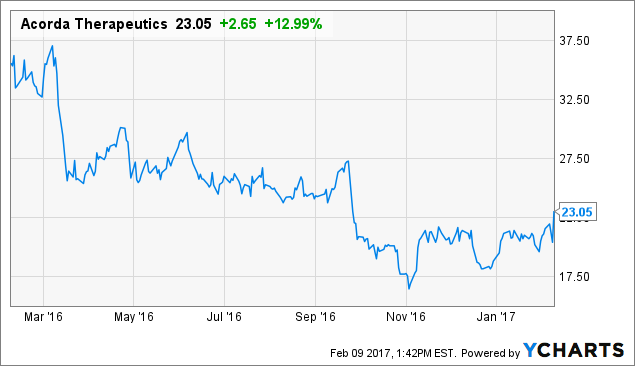