HTG Molecular Diagnostics Inc (NASDAQ:HTGM) shares initially boomed almost 76% on Thursday after the healthcare company served up a preliminary fourth quarter showcase that beat out expectations, scoring the the company its second consecutive outclass. The future looks bright from the eyes of the bulls, who likewise celebrated with a robust revenue outcast for the new year, soaring high above expectations.

In a nutshell, “momentum builds with Quiagen,” the analyst cheers, noting that even though the healthcare stock’s “shares have been quite volatile,” the company still “delivered” robust results that excited the Street.

Therefore, the analyst reiterates a Buy rating on HTGM stock while bumping up the price target from $4 to $5, which implies a 44% upside from where the shares last closed. (To watch Massaro’s track record, click here)

For the fourth quarter of 2017, HTG preannounced revenue of $6.9 to $7.2 million, indicating a whopping 373 to 394% year-over-year surge “far above” Massaro’s previous expectations looking for just $3.2 million, which the analyst attributes to “accelerating execution in its pre-clinical and clinical collaboration profit-sharing business.” Massaro adds, “HTG expects OPEX to step up sequentially in Q4 and expects GMs to step up as a result of recognized revenue from signed collaboration deals during the quarter.”

“Net, net, we believe HTG offers a compelling platform well-positioned to enable pharma companies to develop novel therapies, and upon FDA clearance of its first panel (we expect by the end of Q4/18), transition to a clinical company,” highlights Massaro.

On back of the strong preliminary fourth quarter outperformance, the analyst has lifted his 2017 revenue expectations from $10 million to $13.7 million and likewise boosted his 2018 revenue expectations from $13 million to $21 million while taking his 2019 revenue estimates up from $18 million to $26 million. The analyst surmises, “We also raised our gross margin assumptions in the out years given the company’s visibility for executing on high-margin collaboration profit sharing.”

TipRanks points to one other bull on the Street in the last 3 months betting on this healthcare player, with Ram Selvaraju of H.C. Wainwright rating a Buy on HTGM stock with a $6 price target, marking a nearly 73% upside from where the shares last closed. 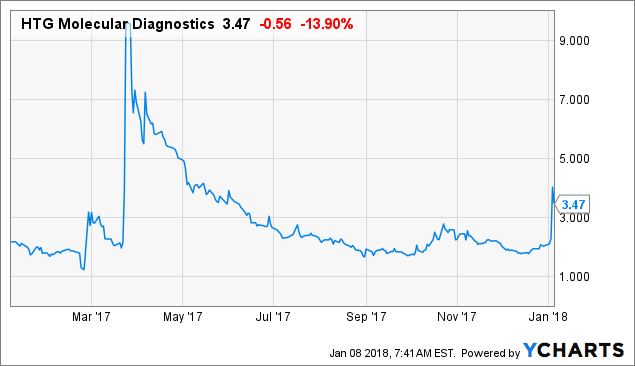