It can be tricky putting a price tag on a biotech company, especially one that offers no profits but promises of big success one day in the future. For those companies that are years away from a payoff, analysts depend on analyzing discounted free cash flow. The process involves forecasting how much free cash flow can be generated by the drugs in a company’s portfolio and pipeline and then discounting the value of that future cash to determine present value, and thus the investment opportunity.

From a fundamental point of view, Singh believes CLSN has an increased chance of success for its second ongoing Phase 3 OPTIMA, and with another compelling (early stage) asset in GEN-1, the analyst advises investors to heed a much-maligned story.

On the back of Singh’s bullish call, Celsion shares are rising nearly 46% to $3.13 in Tuesday’s trading session. 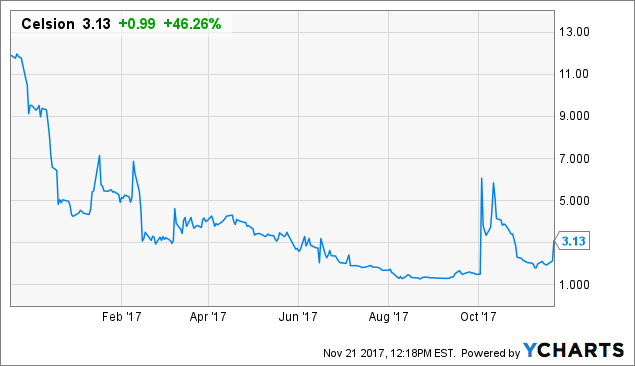 This morning, Cytokinetics, Inc. (NASDAQ:CYTK) announced that the Phase 3 tirasemtiv study in ALS patients missed on both primary and secondary endpoints (drug being discontinued). While VITALITY-ALS was provided the best shot possible for success, tolerability appears to continue to represent an issue for the drug leading to excessive dropouts. Cytokinetics’ shares fell as much as 37% after the news broke.

Cantor analyst Mara Goldstein commented, “Tolerability may have played a role in the failure, given what appeared to be a high drop-out rate and discontinuations, though the primary endpoint and secondary endpoints were not met, even for patients in the mid- and higher dose groups that tolerated the drug. Focus in ALS will now move to CK-2127107, which is also in development for a variety of indications such as SMA, COPD and ALS, and is expected to produce data in 2018. Omecamtiv mecarbil, the company’s heart failure program partnered with AMGN (not covered) has just begun a large, global Phase III study in heart failure and has not yet been included in our valuation, which we see as mitigating the negative tirasemtiv news.”

In reaction, Goldstein is putting her estimates and price target for Cytokinetics ‘under review’. (To watch Goldstein’s track record, click here)

Despite the clinical setback, the Street is still totally bullish on Cytokinetics shares, with TipRanks analytics showcasing CYTK as a Strong Buy. Out of six analysts polled in the last 3 months, all six are bullish on the stock. With a return potential of nearly nearly 160%, the stock’s consensus target price stands at $21.17.