Back in September, the drug maker announced that it had entered into a $300 million debt financing agreement. The debt agreement is in tranches, with $100 million at signing, a further $100 million in 2018, and 2 $50 million tranches later. In order to receive the second tranche of $100 million, Synergy is required to have equal or greater than $128 million in cash on January 31, 2018; hence the reason for its November 2017 equity financing which netted ~$52 million.

However, the analyst points out that Synergy may not be able to qualify for the next tranches of funding:

“based on our/consensus spend estimates for Opex, there is some risk to whether or not SGYP meets the $128M in cash target by the end of January unless either: (1) all or some of the warrants (~21.7 warrants) from the November 2017 financing are exercised at the $2.86 per share exercise price which could net SGYP as much as ~$61M in cash or; (2) SGYP pulls back/shifts timing of spend.”

“If all or some the warrants from the November 2017 financing are exercised, it could give SGYP the required cash but would dilute existing holders by a maximum of ~10%. However, the stock would need to reach $2.86 for this to happen, and not all holders may exercise the warrants. If SGYP does not gain access to the second $100M tranche, we would expect it to raise additional capital […] we believe any additional equity offerings may require a meaningful discount to the current stock price.”

In addition, the analyst suggests that SGYP shares are not cheap compared with peers, and it’s unclear if a buyer will ever materialize:

“Relative to its specialty pharma peers, SGYP is not cheap […] SGYP has $100M in debt and also, on a fully diluted basis including stock options and warrants, has approximately ~305M shares outstanding, meaning a potential takeover bid of $3.25 per share or greater would imply a ~$1B takeout value, which we view as unlikely.” 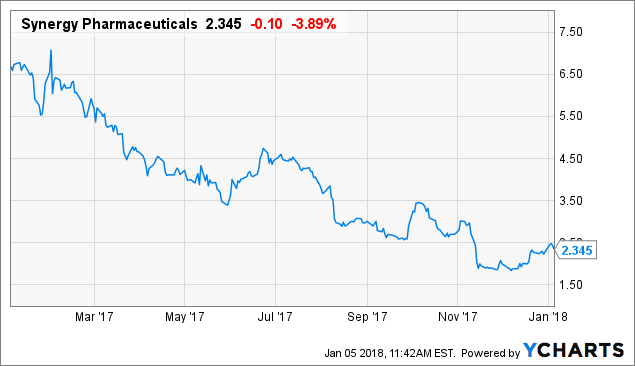