Maxim analyst Jason McCarthy recognizes the data that “sent Celsion shares up sharply,” but is even more enthusiastic that “Management used the strength in the stock to re-negotiate outstanding warrants and as a result raised $15.6M, creating a new cash runway.” The agreement has been amended to allow specific holders to immediately exercise existing warrants.

In reaction, the analyst now sees fit to join the bulls on this biotech mover and shaker, upgrading from a Hold to a Buy rating on CLSN stock while introducing a price target of $7, which implies an 84% increase from where the shares last closed. (To watch McCarthy’s track record, click here)

In addition to Celsion’s extended cash runway and Phase 1b data that has the Street buzzing this week, McCarthy also points to lead asset ThermoDox, writing, “We see OPTIMA (Primary Liver Cancer) as a de-risked pivotal trial. Celsion announced that the phase 3 study of ThermoDox in liver cancer is approaching 70% enrollment (target N=550). The study is on track to complete enrollment in mid-2018 and the first interim analysis (118 events) is expected in early 2019.”

Overall, the bigger picture is now a bullish one for Celsion from McCarthy’s eyes, as he argues: “The financial overhang (less than a quarter of operating cash) is now lifted. As such, we are upgrading the shares to Buy, from Hold and setting a $7 price target. We assume success, principally with ThermoDox, modeled through 2025, and apply a 30% discount rate in our FCFF, discounted-EPS, and sum-of-the-parts models, which are averaged to derive our price target.” 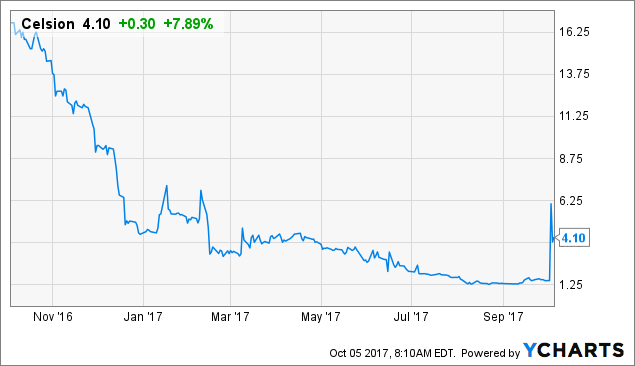 Catabasis Pharmaceuticals Inc (NASDAQ:CATB) shares surged 7% yesterday after the biotech firm posted 24-week and 36-week data from an open label extension (OLE) of its Phase II study evaluating edasalonexent (edasa) in Duchenne muscular dystrophy (DMD). When assessing various lenses into muscle function, Catabasis’ 100 mg/kg each day of treatment proved to slow the rates of decline for subjects in the trial (boys between the ages of four and 7 years old) when juxtaposed against the rate of decline they experienced in the time before taking edasalonexent. With the intent to kickstart a Phase III trial in the first half of next year, a data read-out should surface by 2020.

Cowen analyst Phil Nadeau is encouraged to see “signs of disease stabilization in Edasa’s OLE data,” but nonetheless sees “a number of limitations” to the firm’s “open-label analyses” that keep him from “having high confidence that edasalonexent’s Phase III will be successful.”

For this reason, even though the analyst commends that the drug “continued to be safe and well tolerated” with most adverse events merely “mild,” the analyst reiterates a Market Perform rating on shares of CATB with a $2 price target, which represents a just under 34% downside from current levels. (To watch Nadeau’s track record, click here)

Nadeau notes, “In light of the dearth of treatment options, we think edasalonexent’s Phase II data support its advance into a pivotal Phase III trial. We find it encouraging that boys on 100mg/kg/day edasalonexent had slowed rates of functional decline through 36 weeks of treatment that were consistent across a number of measures of muscle function and were corroborated by improvements in biomarkers of muscle health. Moreover edasalonexent appears to be safe and well tolerated. Therefore we are hopeful that edasalonexent could become a new option for patients with DMD.”

Though Nadeau is not ready to budge from the sidelines quite yet, he contends: “Nonetheless, […] we think that Catabasis has designed a rigorous and meaningful pivotal trial. Therefore success in the Ph. III would be a definitive proof of edasalonexent’s efficacy and would establish a place for it in the treatment paradigm.”

Cautious optimism circles this drug maker, with TipRanks analytics demonstrating CATB as a Buy. Out of 5 analysts polled by TipRanks in the last 3 months, 3 are bullish on Catabasis stock while 2 remain sidelined. With a return potential of 61%, the stock’s consensus target price stands at $4.88.