Newman wrote, “We are skeptical that the 72 mcg dose of Linzess will show less diarrhea without sacrificing efficacy vs. the approved 145 mcg dose in CIC, based on earlier Phase 2b data for a 75 mcg dose. We also believe that SGYP’s Trulance will still have a much lower rate of diarrhea, appealing strongly to doctors and patients. We expect 72 mcg results for Linzess upon potential supplemental FDA approval in early 2017. Interestingly, Phase 3 data for the 72 mcg Linzess dose have been available since October 2015, but have never been presented, making us question the data quality. Importantly, the 72 mcg and 145 mcg doses did show a statistically significant improvement vs. placebo for Complete Spontaneous Bowel Movements (CSBM), and diarrhea was lower in the 72 mcg vs. 145 mcg dose, but details have never been disclosed.”

Newman reiterates a Buy rating on SGYP, with a price target of $13, which represents a potential upside of 131% from where the stock is currently trading.

Out of the 6 analysts polled in the past 12 months, 5 rate Synergy Pharmaceuticals stock a Buy, while 1 rates the stock a Hold. With a return potential of 99%, the stock’s consensus target price stands at $11.17. 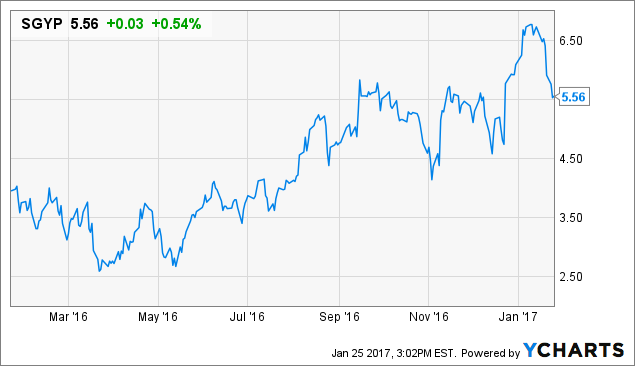